Our recommendation to visit Greece 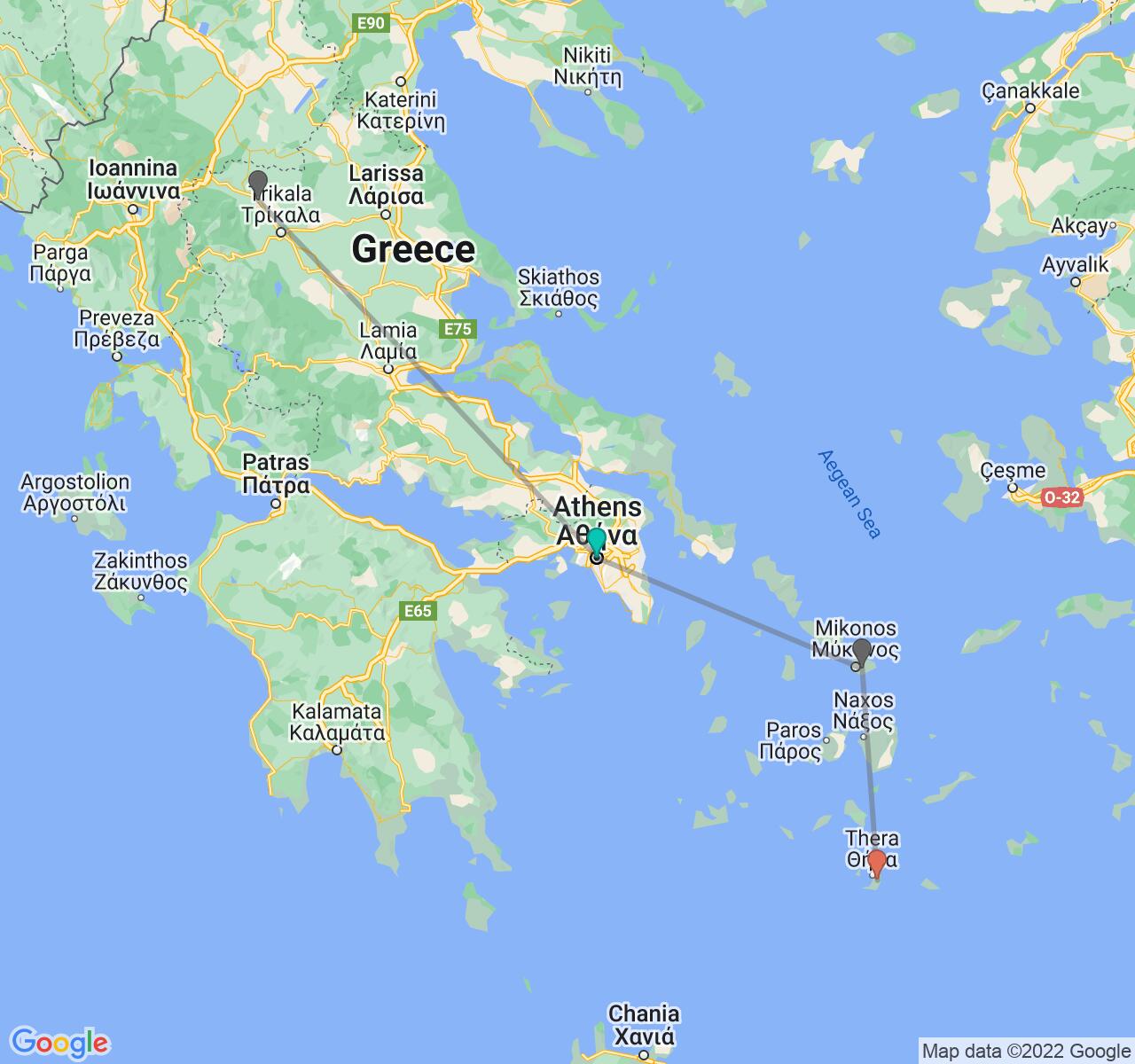 Our classic tour of Greece, including the main historical sights and a relaxing getaway to two of the most beautiful Greek islands.

Our recommendation to visit Greece and neighboring countries 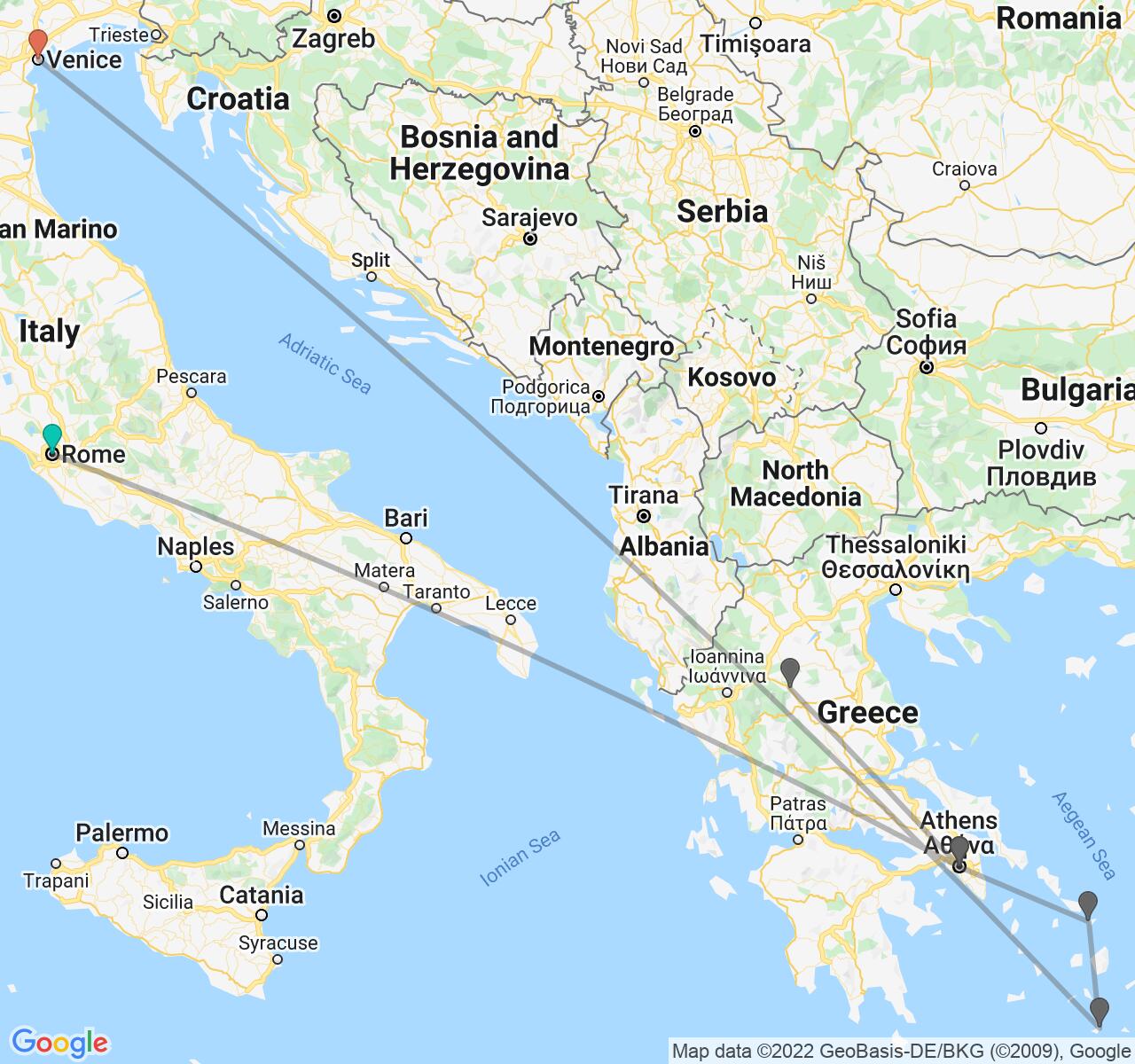 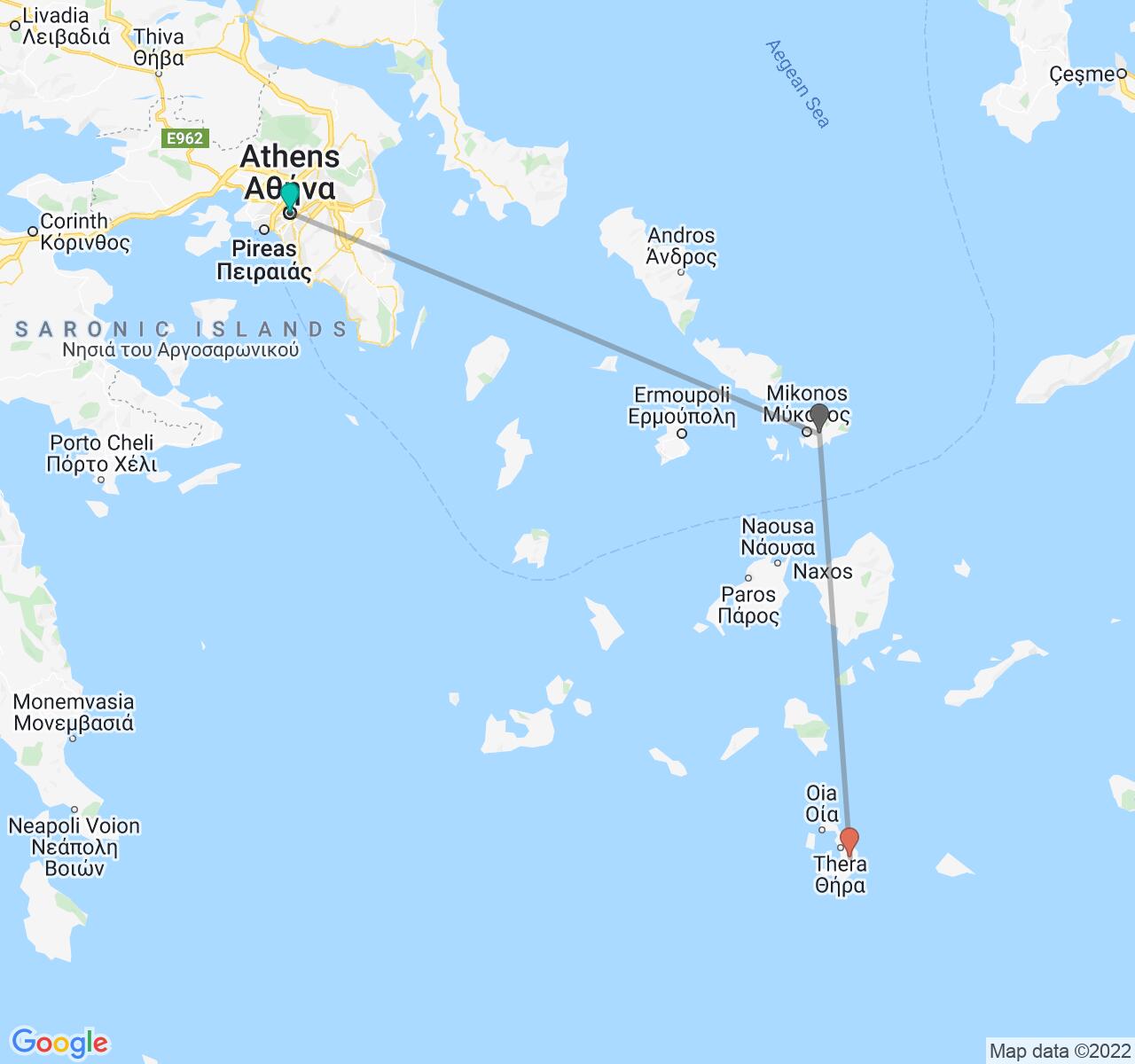 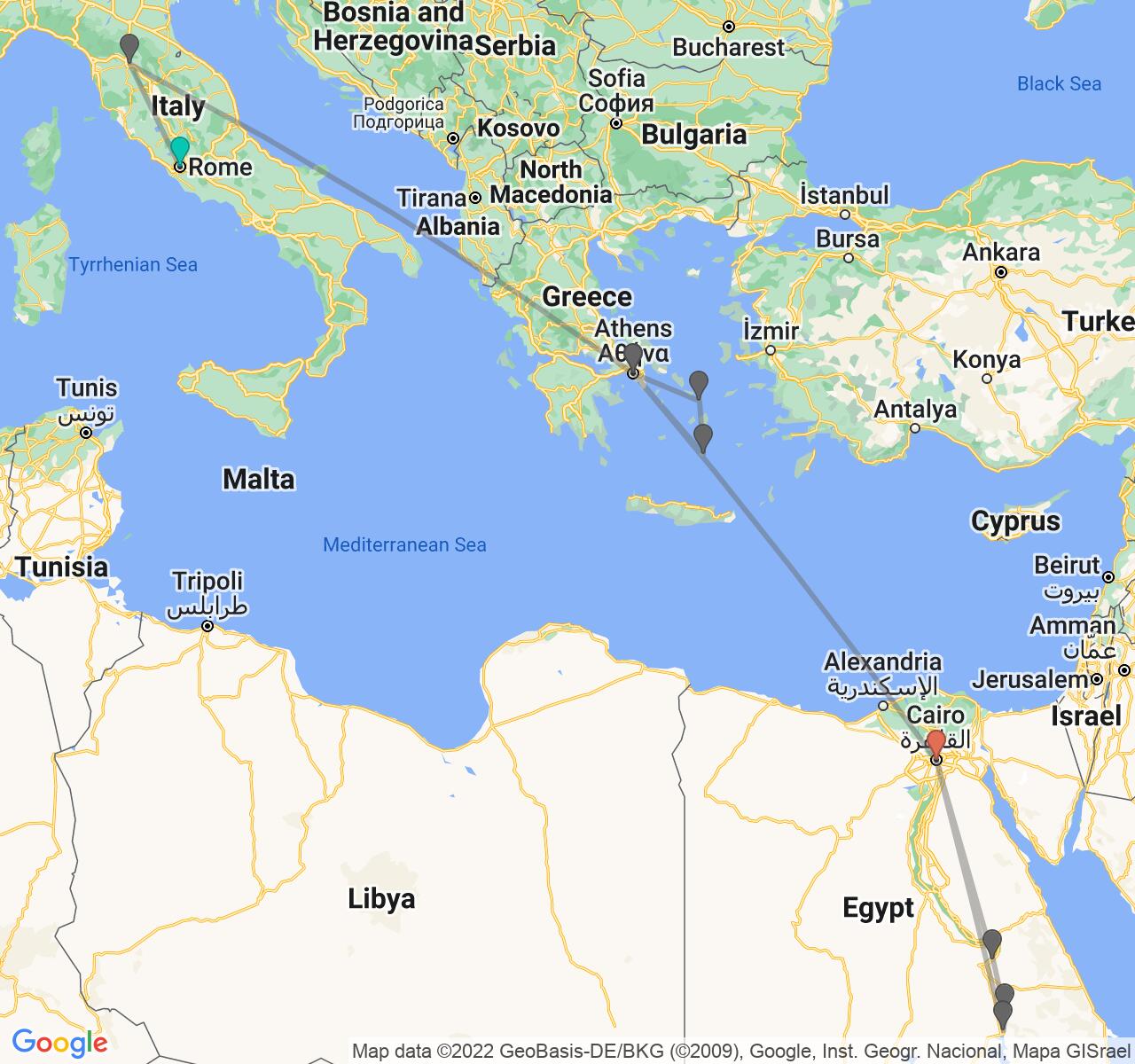 The first time we have used Exoticca

This is the first time we have used Exoticca but it won't be the last. Everything went smoothly, no hidden costs and the resort was gorgeous. Everything was perfect, thank you Exoticca for a much-needed vacation.

It’s time to sip a glass of ouzo and immerse yourself in the treasures of Greece, the Cradle of Western Civilization. Nowhere else on earth offers the culture, climate and coastlines of Greece and this beautiful country is the birthplace of Western philosophy, democracy and the Olympic Games. A vacation to Greece suits all kinds of travelers, whether it’s the endless history, delicious cuisine or sun-soaked beaches that tempt you.

Situated in southeastern Europe, on the southernmost tip of the Balkan Peninsula, Greece shares land borders with Turkey, Albania, North Macedonia and Bulgaria. The surrounding seas of the Aegean, Ionian and Mediterranean are dotted with Greece’s paradise islands, of which there are 227 inhabited islands. Holidays to the Greek Islands are always popular, with Crete, Santorini, Lesbos and Mykonos among the best-known islands, although there are hundreds of little-known islands to discover on a tour of Greece. Furthermore, the romantic charm of these islands, as portrayed in the blockbuster movie Mamma Mia makes a honeymoon to Greece a popular choice among newlyweds. The only question is which Greek Island to visit!

If you’d rather stick to the mainland, you’ll find plenty of unspoilt beaches along the whooping 16,000 kilometres of coastline. Although Greece’s gorgeous Mediterranean climate is well-suited for an all-inclusive beach vacation, the interior of the country is filled with picturesque mountain scenery, perfect for more active pursuits. In fact, 80% of Greece is mountainous, where you’ll find the famous Mount Olympus, home of the Greek gods.

In the ancient capital of Athens, you’ll find bucket-list sights such as the Acropolis, the Parthenon and the Theatre of Dionysus, where you can walk in the footsteps of legendary Athenians such as Plato, Pericles and Aristotle.

There are infinite things to see and do in Greece; it could take a lifetime to truly experience the richness of this ancient civilization. Endless cultural gems, warm hospitality and stunning natural scenery make travel to Greece eternally popular. From island-hopping in the Aegean to consulting the mysterious Oracle in Delphi or exploring the magical monasteries of Meteora, the possibilities are endless on a trip to Greece.

The best time to travel to Greece for a beach vacation is during the summer months when you can enjoy long, sunny days and balmy evenings. Travelling to Greece for sightseeing is recommended in the spring and autumn, before the crowds of summer and when the temperatures are better suited to exploring the country’s cultural delights.

The Golden Age of Ancient Greece took place around the 5th and 4th centuries BC. During this important period, Greece was divided into city-states, known as polis, the most famous of which were Athens, Sparta, Delphi and Thebes, among others. Each polis had its own laws, languages, customs and governments and there were often conflicts and struggles between the states for domination of Greece, known as Hellas at the time. The legacy of this period can be seen in some of the country’s most inspiring monuments, such as the Parthenon in Athens, the Sanctuary of Delphi and the ruins of Olympia. A vacation to Greece is incomplete without visiting at least a few of the ancient sites from this Golden Age.

Following the Macedonian takeover and death of Alexander the Great in 323 BC, Greece soon came under the control of the ever-growing Roman Empire. The days of the organised polis were over, but self-governance was still allowed by the Romans, although there was strict supervision. Nevertheless, the Romans admired the intricacies of Greek culture and the customs and language of Greece traveled far and wide across Europe thanks to the Roman Empire. The Roman Agora and Hadrian’s Library in Athens were both constructed during this era, and are must-see sights on a tour of Greece.

After the split of the Roman Empire, Greece became part of the Byzantine Empire for several centuries. You’ll find a number of Byzantine Churches throughout Greece, recognisable by their domed roofs. In 1453 the Fall of Constantinople marked the end of the Byzantine Empire and Greece came under the control of the Ottomans. It was not until 1821 that Greece declared its independence, although struggles and conflicts over territory continued for many years.

In the 20th-century, Germany occupied Greece during the Second World War and in 1944 a complicated and violent civil war took hold of the country. Finally, in 1975, Greece became a democracy once more and it later joined the European Union in 1981.

From the snow-capped mountains of the north to the white-sand beaches of the Cyclades Islands, Greece offers a cornucopia of natural beauty and countless opportunities to enjoy the great outdoors. Some of the most breathtaking natural wonders to explore on a Greece vacation include the magical underground lake in the Cave of Melissani on the island of Kefalonia, the giant rock formations and monasteries of Meteora in central Greece and the azure Blue Caves of Zakynthos.

Mount Olympus National Park, home to the highest peak in the country, is a haven for walkers with plenty of hiking routes, waterfalls and caves to explore. If your tour of Greece takes you to the historic island of Crete, be sure to explore Samaria Gorge National Park. A biosphere reserve, this magical 16-kilometre long gorge was carved out by a small river and offers all kinds of exciting walking and climbing routes along its narrow pathways and dramatic cliff faces.

Greece is also home to some of the most diverse wildlife in Europe, including brown bears, wildcats, jackals and wolves, not forgetting the sea turtles and dolphins you’ll find around the shores of the Greek Islands.

With thousands of years of history, Greek culture is rich and vibrant, filled with traditions, music, folklore, delicious food and socialising. In fact, socialising is a pillar of modern Greek culture, which you can observe on the terraces of any cafe, where groups of all ages take time out of their days to catch up over coffee or a refreshing glass of ouzo, the famous Greek aperitif.

Greek culture comes to life at the dining table and the timeless trinity of feta cheese, olives and olive oil are sure to leave your taste buds enlivened. Washed down with a generous glass of local wine, Greek cuisine is an important part of Greek culture and certainly a highlight of any trip to Greece.

Of all the elements of Greek culture, language is perhaps the most important. Known for its unique alphabet, the Greek heard today is directly derived from Ancient Greek, something the locals are fiercely proud of as it has endured for millennia.

If you travel to Greece you might be fortunate enough to experience some of the vibrant cultural festivals that are scattered across the annual calendar. Most festivals are closely linked to Greek Orthodox traditions, but you’ll find different regional celebrations, dances and folk music throughout Greece.

On a vacation to Greece, you’ll appreciate the laid-back way of life. You’ll likely find that life moves at a slower pace, especially in the Greek Islands, giving you plenty of time to enjoy the delights of this beautiful country.

Travel to Greece, the Cradle of Western Civilization, where nature, culture and history combine to create a one-of-a-kind destination. From the mysterious ruins of Knossos in Crete to the windmills of Santorini, there are endless treasures to explore on a trip to Greece.