Our recommendation to visit Nepal 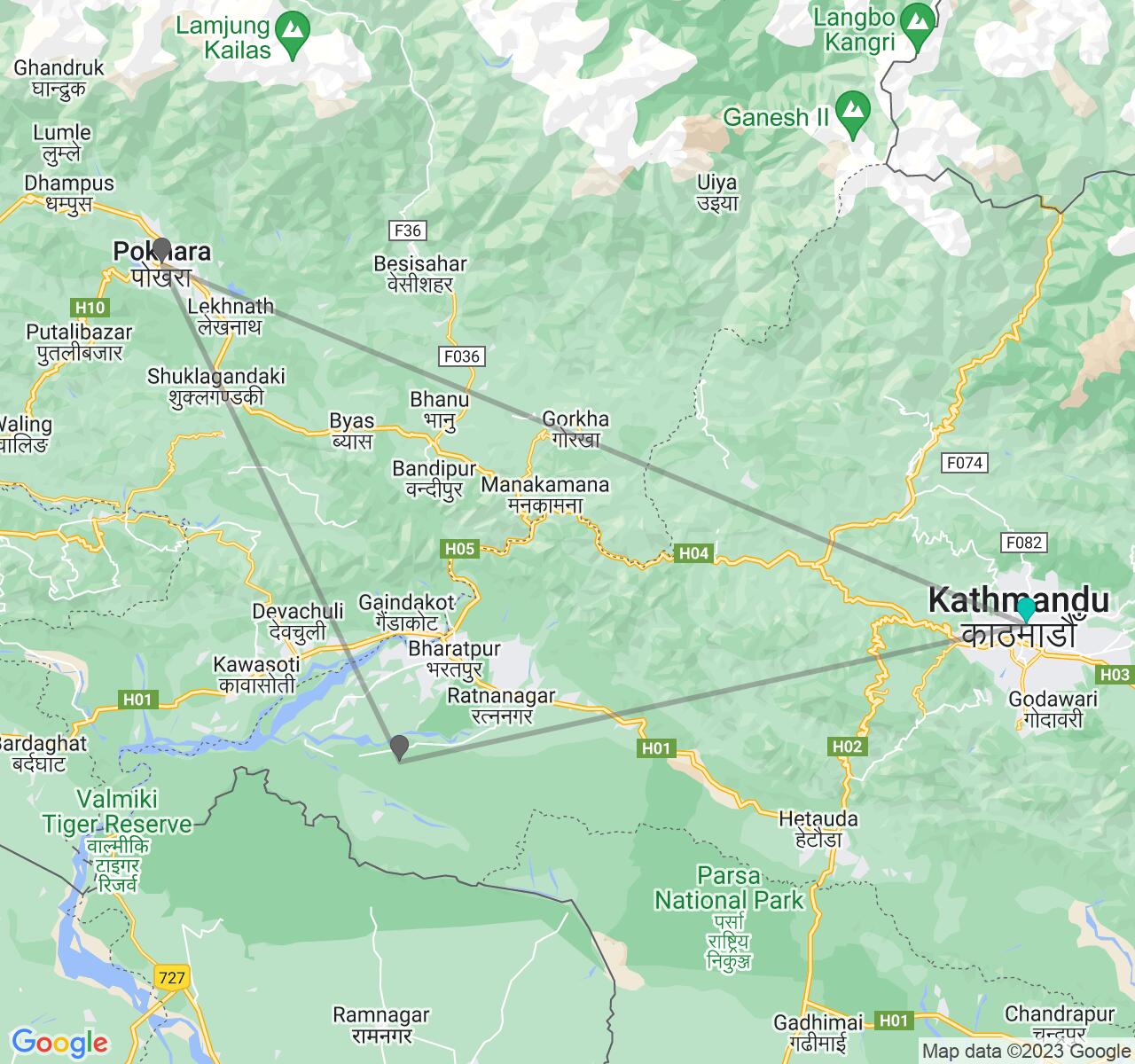 Our recommendation to visit Nepal and neighboring countries 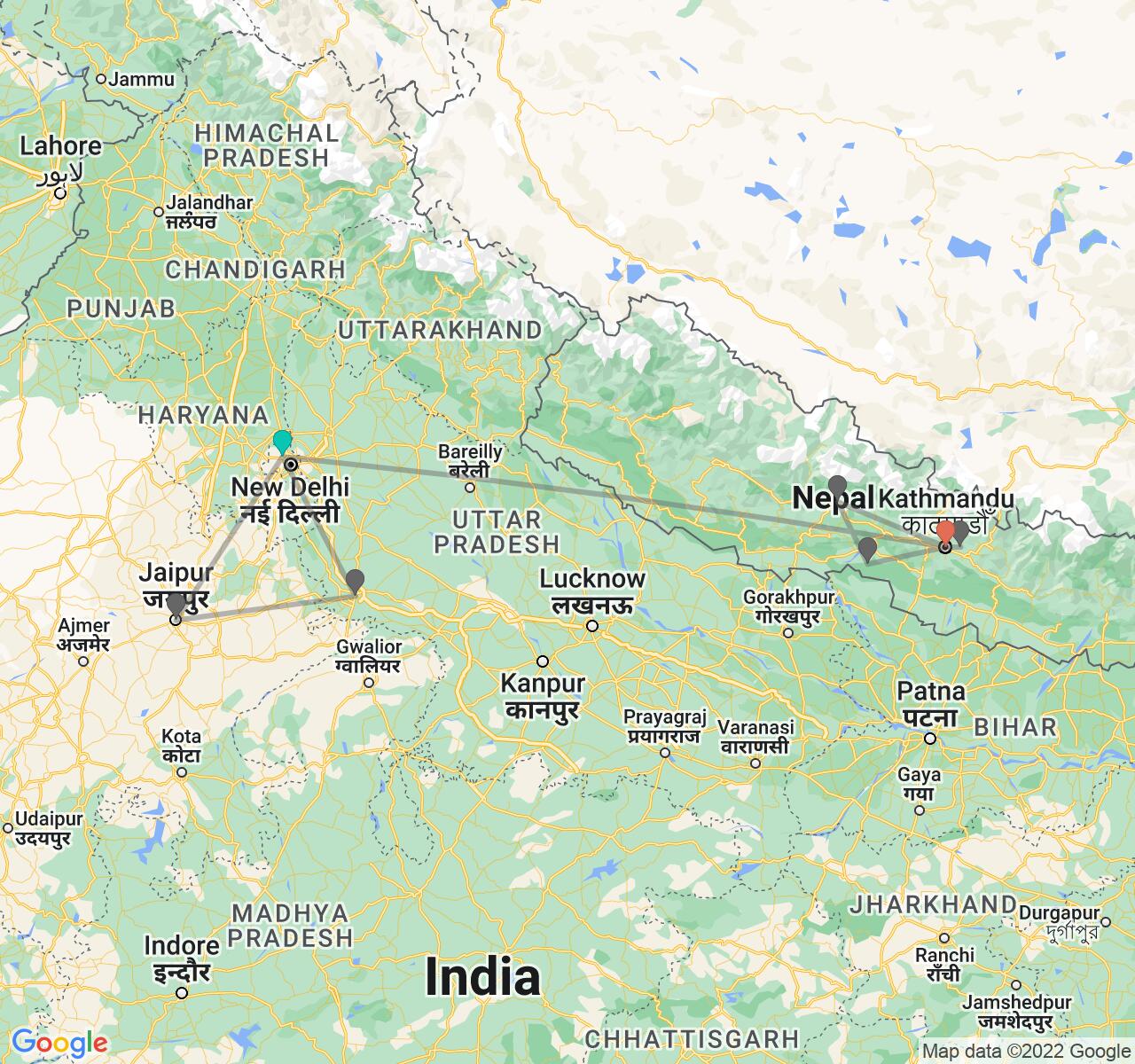 Our classic tour of India's Golden Triangle combined with an unforgettable journey through Nepal, home of the Himalayas. 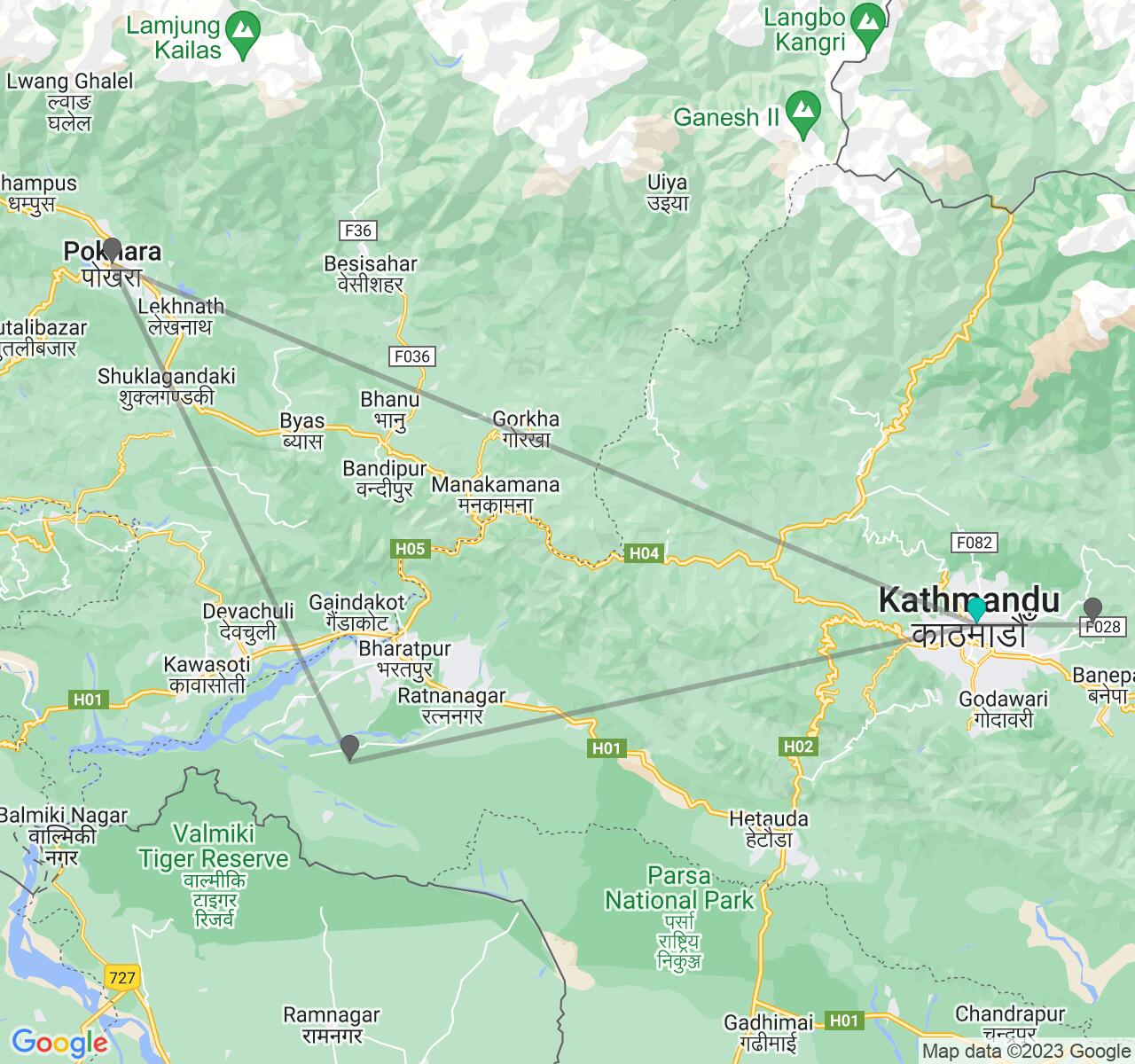 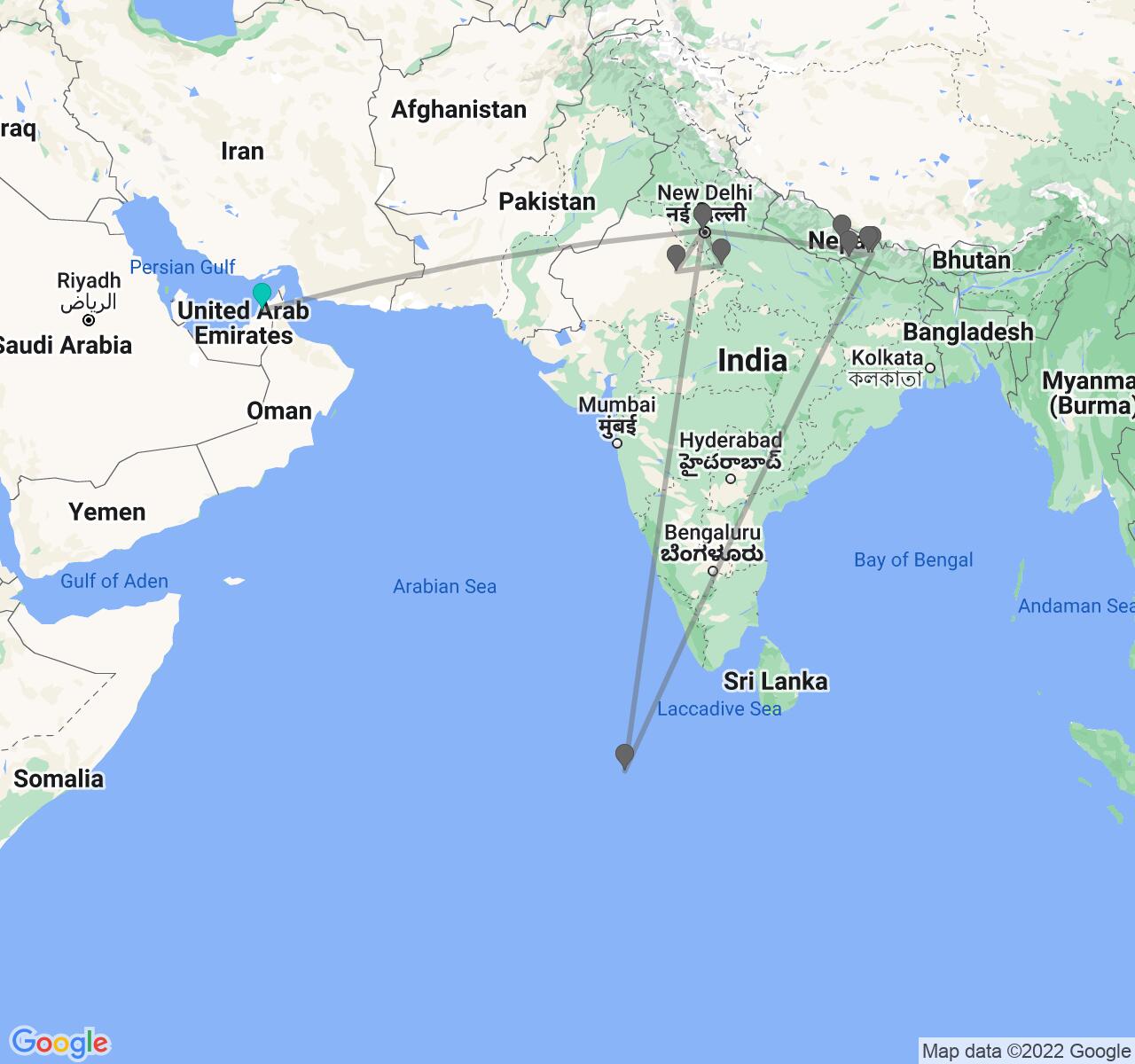 Dubai & Jewels of the Indian Subcontinent in 28 days 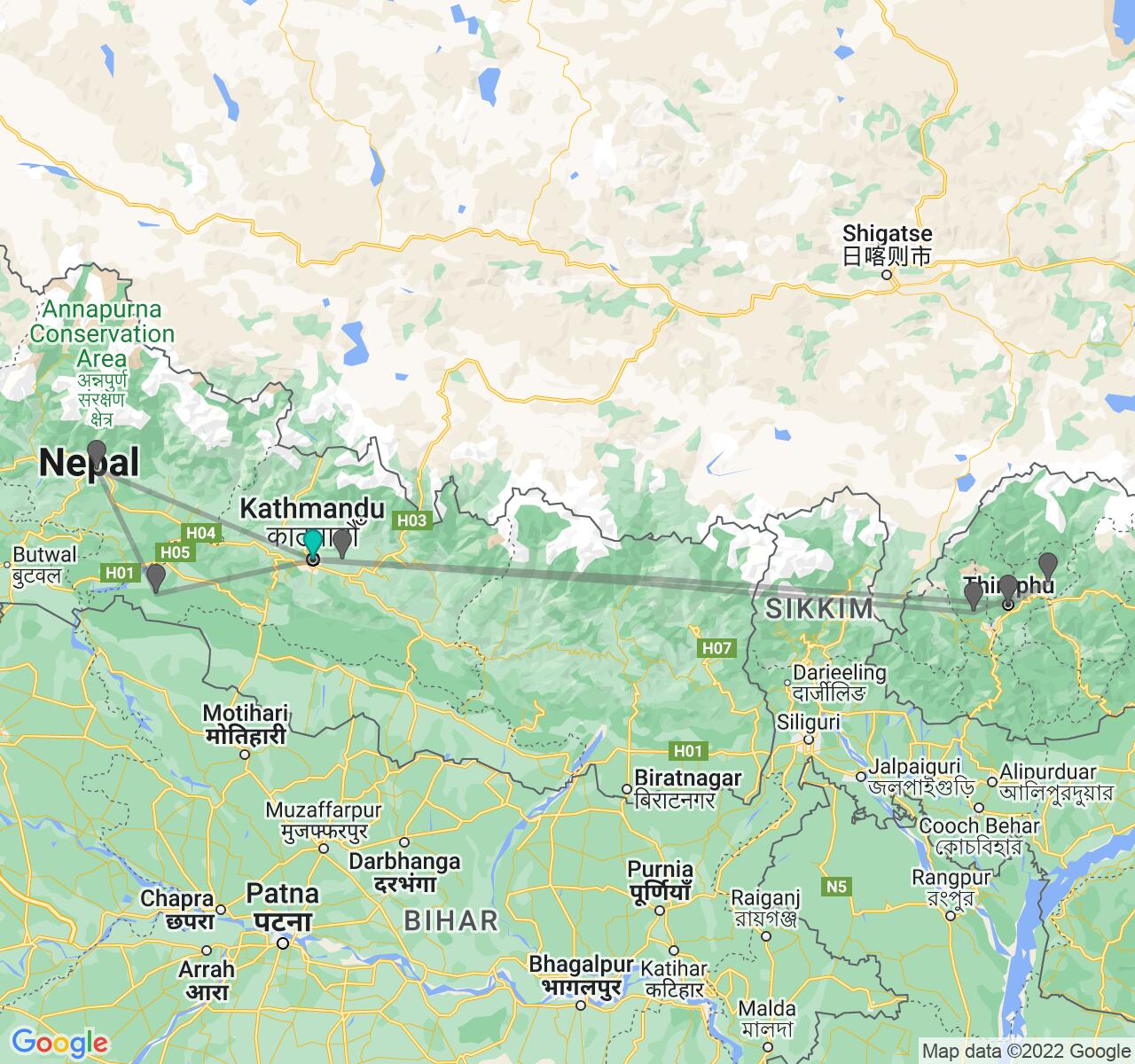 This was our third adventure with Exoticca

We were part of a small group of fellow travellers, all like-minded people who loved to travel as much as we do. Our guides were intelligent, enthusiastic people who wanted nothing more than to share their country and experiences with us. We honestly felt as if we were treated like family

A landlocked South Asian nation, Nepal is nestled amidst the peaks of the magical Himalayas and is known as the country where ‘culture and nature meets’. A classic travel destination, a holiday to Nepal is the perfect blend of golden temples and stupas, abundant wildlife and soul-stirring Himilayan views; the kind of views you can only dream of!

In fact, Nepal is home to eight of the world's tallest mountains including mythical Mount Everest. Bordered by China, India and Bangladesh, Nepal offers both adrenalin-filled adventures, such as mountain climbing, safaris and deft-defying Everest flights, to more laid-back pursuits such as sightseeing in the medieval cities of Kathmandu, Patan and Bhaktapur or simply soaking up spectacular panoramic views from a hill-top village.

Prayer flags, prayer wheels and jewel-toned stupas decorate your journey through the ‘roof of the world’. The iconic Durbar Squares offer insight into the days of the Newar Kings and the entire Kathmandu Valley acts as an open-air museum, with the capital, Kathmandu at the heart of all Nepal tours.

A trip to Nepal also offers an insight into the beliefs and practices of both Hinduism and Buddhism, important pillars of everyday life in the country, after all Lumbini, today an important pilgrimage site, is believed to be the birthplace of Buddha himself. Above all, travel to Nepal is all about the landscapes, in themselves spiritual.

Nepal’s history is closely intertwined with that of the wider Indian subcontinent and the nation was first mentioned in ancient Vedic texts, dating back to the emergence of Hinduism. Around the 4th-century BC, Buddhism was introduced to Nepal, influenced by the teachings of Gautama Buddha. Today, you can visit the birthplace of Buddha himself in Lumbini during a tour of Nepal.

In the early centuries, the Licchavi dynasty flourished throughout India and Nepal and built many Hindu and Buddhist temples. This great kingdom began to decline in the 8th-century as Newar culture flourished. The traditions and practices of Newar culture are still prevalent in Nepal and form a distinct and unique cultural community who continue their age-old traditions, particularly in the Kathmandu Valley.

In the 15th-century the Malla dynasty divided Nepal into three kingdoms: Kathmandu, Patan and Bhaktapur, reunited 300 years later in the 18th-century by the Gorka king Prithvi Narayan Shan, who is remembered for his expansion of Nepal’s borders, eventually facing rivalry with British India.

This led to the Anglo-Nepal War in the early 19th-century and a period of instability followed. The pro-British Rana dynasty took power in 1846, although their reign was somewhat tyrannous and it was not until over 100 years later that democracy was introduced to the country. Civil wars in the 1990s and 2000s resulted in the fall of the world’s last surviving Hindu monarchy in 2008, marking the beginning of the secular republic of Nepal.

The land of Himalayas, Nepal is filled with magical landscapes to explore and admire. A treasure trove for nature lovers, Nepal holiday packages can encompass as many as four different climate zones due to the country’s varied altitude.

Mount Everest National Park offers giant snow capped peaks and thrilling mountain-climbing opportunities, whilst the tropical jungles of Chitwan National Park invite travellers to experience the wild side of Nepal. Wildlife abounds here; Nepal is known for its plentiful butterfly species, with 11 of the 15 butterfly families found within the country, and it is even home to rare freshwater dolphins, found in the glistening Narayani and Ghaghara rivers. Avid birdwatchers would be wise to choose a Nepal holiday as the country is home to more than 850 bird species, such as the colourful Himalayan monal, the country’s national bird.

Nepalese culture is closely tied to religion. Nepal is home to the largest percentage of Hindu’s in the world, as well as a notable Buddhist population. Until recently, Nepal was a Hindu Kingdom and a trip to Nepal is incomplete without exploring the temples, such as Pashupatinath Temple, a historic Hindu site, which highlight the significance of Hinduism on Nepalese culture.

Nepal is also an amazing example of the coexistence of religions. Buddhism and Hinduism have existed side by side in Nepal for centuries and the national culture incorporates parts of both traditions. Elaborate festivals are an important facet of Nepalese culture, from complex marriage rituals to the extensive Dashain Festival, a Hindu festival celebrated at the end of monsoon season every year.

Arranged marriages are very common in Nepal and a normal part of the family structure whilst distinct gender roles are still common-place. Although Nepal’s urban areas are growing, particularly Kathmandu, a favourite starting point for most tour packages of Nepal, the majority of the population depend on agriculture for their incomes and live in more rural parts of the country.

A long-time backpacker paradise, a Nepal tour is the perfect chance to understand a deeply religious and vibrant country, to hear the fluttering of prayer flags and to watch in awe as the sun rises over mythical Mount Everest. A holiday to Nepal offers, not only, temples, stupas and sacred historic sights, but also rich, diverse wildlife and charming hilltop villages where time seems to move at a slower pace. Travel to Nepal and capture the essence of the ‘roof of the world’.