Our recommendation to visit Peru 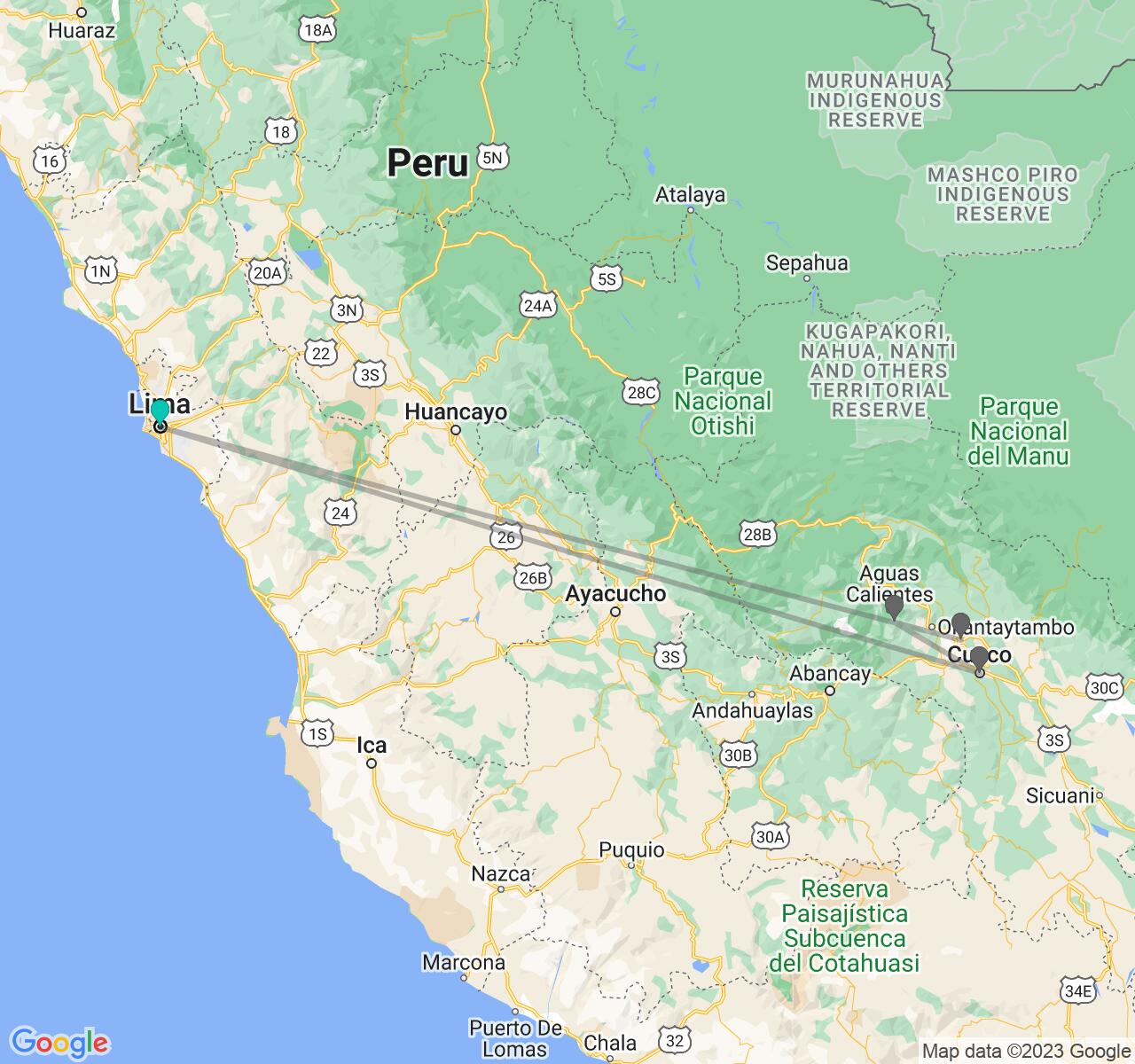 Sacred Land of the Incas in 9 days

Our recommendation to visit Peru and neighboring countries

Incas, Amazon and Galapagos in 19 days

The best choice for lovers of wildlife and culture, this trip includes the Galapagos Islands, Machu Picchu and a stay in the Amazon rainforest!

From Sacred Valley to Lake Titicaca in 10 days 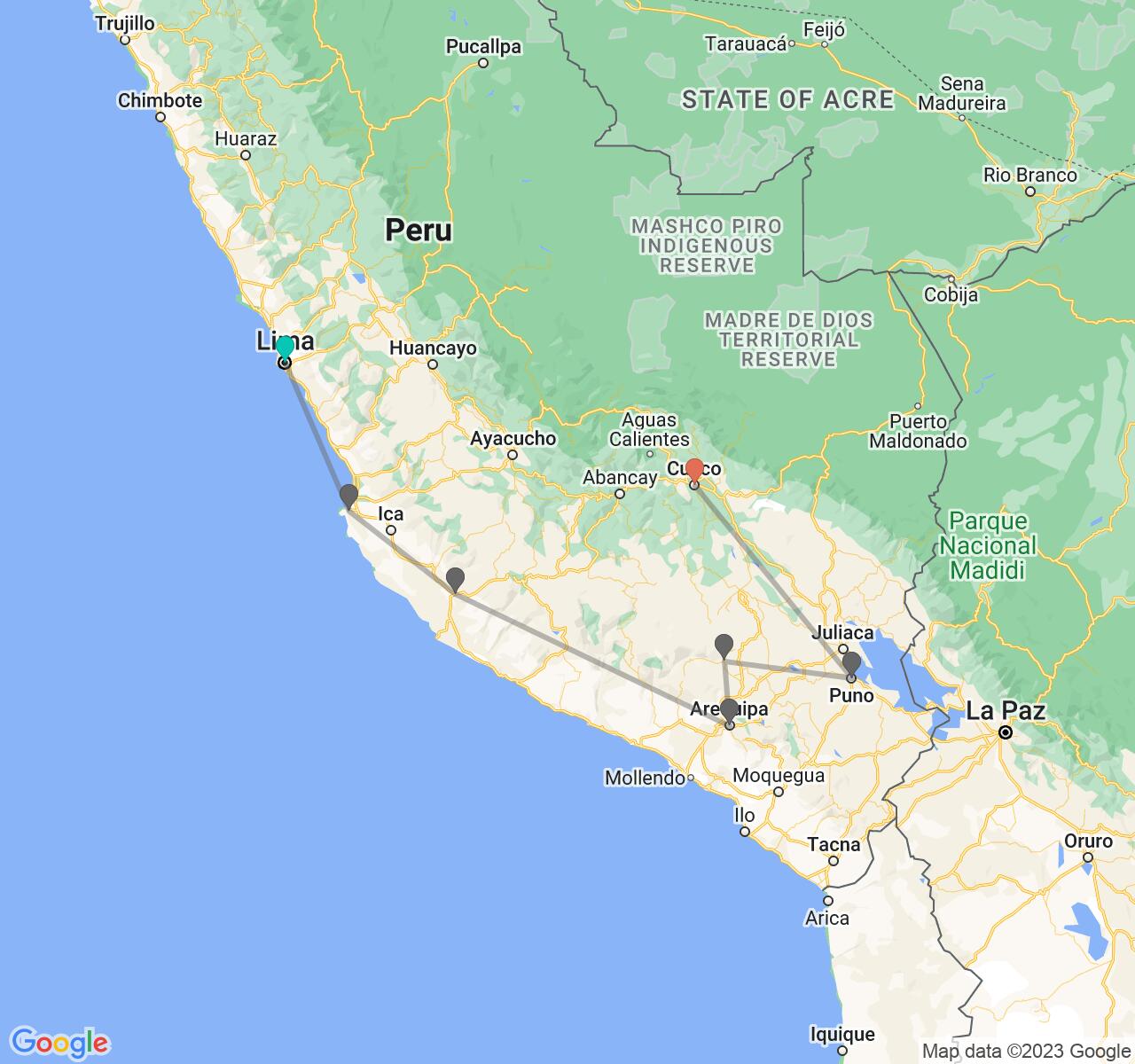 Cities, Falls and Wonders in 19 days

The most amazing trip my wife and I have ever taken

By far the Amazon lodge and tour were the best. Kevin and Charles were our tour guys and they went above and beyond to make the best of it, it was incredible. It was the best place for us to reconnect to ourselves, nature, and to be a better person, this place was the best place I have been.

Located on the west coast of South America, Peru is a country that ignites the imagination of travelers worldwide, with its fascinating ancient civilizations, wondrous natural attractions, and iconic monuments. Bordered by Bolivia, Ecuador, Colombia, Chile, and Brazil, and with a vast coastline along the Pacific Ocean, a tour of Peru is one of the must-do travel experiences. The country has a diverse landscape, stretching from the arid plains of Nazca, where the mysterious Nazca Lines are located, to the high altitude peaks of the Andes. The legacy of the Inca Empire and the remnants of this mighty civilization, preserved in monuments such as Machu Picchu and the Rachqui Ruins, are unmissable sights on a vacation to Peru, along with the colonial architecture of its colorful cities, such as the capital, Lima. Peru encourages visitors to be adventurous, with a multitude of activities on offer, from sailing on Lake Titicaca to trekking in the Sacred Valley. The famous Inca Trail, reserved for the most adventurous of travelers, is perhaps the most famous of all trekking routes, culminating in an ascent to Machu Picchu. One of the regions most prosperous economies, with a huge tourist industry, Peru has become increasingly popular in recent years, with travelers keen to tick its many sights off of their bucket lists.

Peru is a megadiverse country, and the sanctuary of many of the world’s species of animal, bird and plant life, including a large number of endemic species. From the Altiplano to the Amazon Basin, the country’s diverse geography and accompanying wildlife makes it a paradise for nature lovers. The Amazon Rainforest in Peru, known for its heavy rainfall and tropical, humid climate, is home to a plethora of weird and wonderful animals species such as the pink river dolphin, found in the Amazon River, jaguars, giant otters, and primates, along with an impressive one-third of the worlds bird species. The national bird is the bizarre Andean Cock-of-the-Rock, whilst the mighty Andean Condor is the highlight of Peru’s Colca Canyon, a deep river canyon in the south of the country where viewpoints such as the Cruz del Condor allowing onlookers to watch the flight of huge Condors, the largest flying bird in the world. The uninhabited Ballestas Islands, located off the coast of the port city of Pisco, is home to large populations of sea lions, pelicans, Peruvian boobies and Humboldt penguins, and is a popular day-trip destination for travelers on a vacation package to Peru. Aside from the country’s rich wildlife, Lake Titicaca stands out as an incredible natural attraction, owing to its immense size and altitude, securing it the title of the world’s highest navigable body of water and the largest lake in South America. In Andean traditions, it is thought to be the birthplace of the Sun God, and its glistening, reflective waters, which stretch across the border between Bolivia and Peru, are home to numerous floating islands, such as Taquile and Isla del Sol, where traditional communities live and work. Tour packages to Peru all inclusive offer travelers a chance to discover the great variety of the country’s bountiful nature in one exciting trip.

Peru’s history can be traced back to the 4th century BC and to the ancient societies of the Chavin, Moche and the Nasca. The most well-known era of Peruvian history came later, in the 15th century with the enigmatic Inca civilization, which emerged as a powerful state in this period. Growing out of their capital in Cusco, this revered civilization started as a small ethnic group of Quechuas, but soon their influence expanded and incorporated their neighbors under the great Emperor Pachacuti. The Inca Empire eventually controlled most of the Andean region, stretching into modern day Ecuador, Bolivia, Chile, and Argentina, and are thought to have had a population of approximately 16 million inhabitants, who were encouraged to worship the Sun God, Inti and practice human sacrifice as a means to appease the gods. This mysterious civilization did not last for long, as by 1532, Spanish conquistadors had captured the Inca Emperor in the Battle of Cajamarca, marking the beginning of the end for the Incas. The emperor was later killed and a long conquest ensued, resulting in many deaths for the indigenous community, caused by both disease and warfare. Spanish victory came in 1572, with colonization and the destruction of much of the culture, monuments, religion, and heritage of the Incas following shortly afterward. Spanish language, culture, and Catholicism replaced the indigenous beliefs and way of life, although even today, populations continue to speak in their native languages, such as Quechua. Most travelers on a holiday to Peru are excited to discover the lost ruins of the Inca Empire, such as Machu Picchu and to understand the values and traditions of this iconic civilization.

With a population of approximately 32 million, made up of a variety of ethnicities, Peru has a diverse culture, ranging from Spanish influences, as seen in the language and architecture, to indigenous traditions as demonstrated in the varied folklore and musical styles and dances, which often include references to ancient beliefs surrounding spirits and the Sun God. The indigenous communities are also well known for their arts and crafts, such as the brightly colored Andean clothing, with their intricate embroidery and vibrant patterns. The different regions of Peru possess their own unique influences and traditions; in the highlands of the Andes you can expect to see folklore displays with flute and drum music, ritualistic dance and masks, whilst down in the Amazon, tribal influences are more evident. In the coastal cities, there is an obvious Spanish character, both in the cuisine, terraced cafes, and architecture. In contrast, travel through the Sacred Valley and you may feel as if you have been transported back in time, as you pass through the traditional villages of Pisac and Ollantaytambo, with their authentic markets, artisan textile weavers, Quechua-speaking communities and monolithic temple ruins, considered sacred to the inhabitants. Despite the modern feel of the coastal capital of Lima, you are never far from making contact with the ancient traditions and culture of the country’s earliest civilizations.A trip to Peru will allow you to walk in the footsteps of the Inca’s, get up close to some of the worlds most diverse and unique wildlife, uncover the secrets of Machu Picchu and the Nazca Lines and realize your dreams of navigating Lake Titicaca. A paradise for the most intrepid travelers, a tour of Peru is a must-do bucket list experience.