The best gothic cities and medieval towns are enchanting destinations for an unforgettable trip! Around the world, you’ll find amazing examples of architecture from yesteryear. Furthermore, Europe is especially rich in fairytale architecture. From towering church spires to gothic churches and timber-framed houses, here’s our pick of amazing architecture to discover on your next vacation! 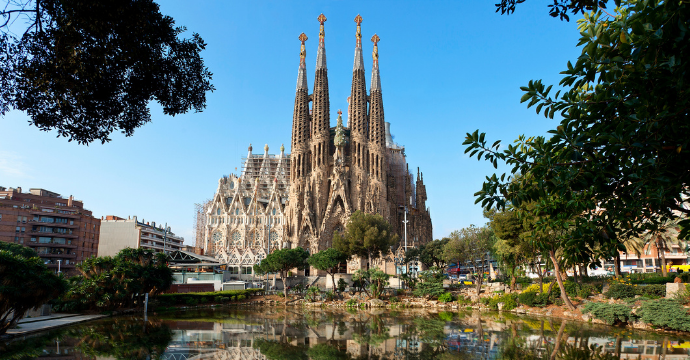 When it comes to amazing architecture, Barcelona ranks highly! Of course, the architecture of the famous Catalan, Gaudi, is one of the main attractions. The marvellous Sagrada Familia is the highlight, with its amazing unfinished facade that depicts numerous biblical scenes in impressive detail. This style of architecture, known as Catalan Modernism, or Modernisme, is seen in other architectural landmarks around the city. Indeed, Casa Batllo and Casa Mila are two more Gaudi masterpieces to admire on a trip to Barcelona. In the hills above the city, the Temple of the Sacred Heart of Jesus stands atop Mount Tibidabo, an impressive example of Neo-Gothic architecture. Finally, the Barri Gotic is where you’ll find the charming remnants of the old gothic city, complete with an impressive 13th-century cathedral. 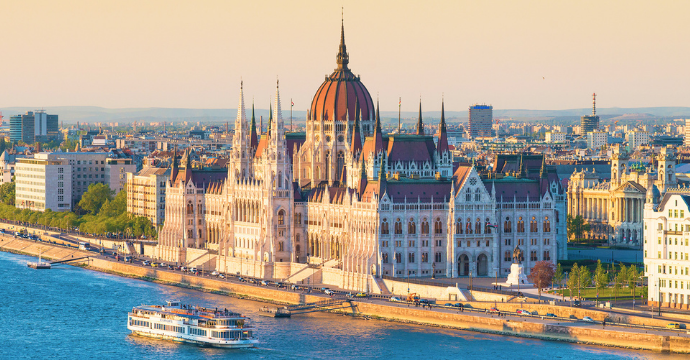 Budapest is one of the world’s most impressive gothic cities. The best example of this is the city’s amazing Parliament Building, a neo-Gothic masterpiece, inspired by London’s Westminster Palace. It took 17 years to complete this ‘cathedral of democracy’ and it is the third-largest parliament building in the world. Furthermore, the historic Castle District is home to an array of historic architecture including the Royal Palace and Fisherman’s Bastion. 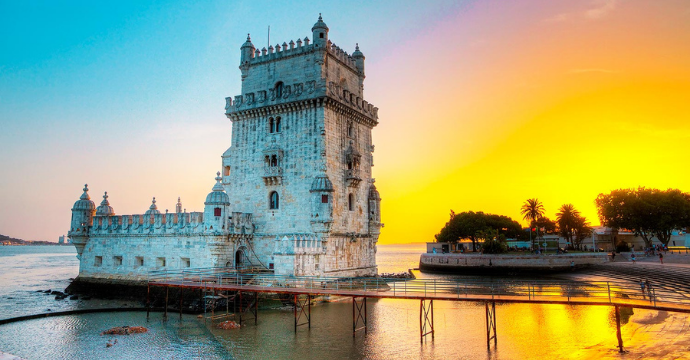 Lisbon has been the capital of Portugal since the 13th-century. Therefore, it boasts an amazing architectural heritage, seen in its impressive array of architectural styles and glorious monuments. Sao Jorge Castle, Lisbon Cathedral and the Convent of Our Lady of Mount Carmel transport visitors back to medieval times. On the other hand, the intricate late Gothic Manueline style architecture of Jeronimos Monastery and Belem Tower is simply unmissable. Both of these are UNESCO World Heritage Site, and Belem Tower is an important relic of Portugal’s seafaring past. Of course, you cannot travel to Lisbon without admiring the azulejos tiles of Fronteira Palace and the Monastery of São Vicente de Fora. 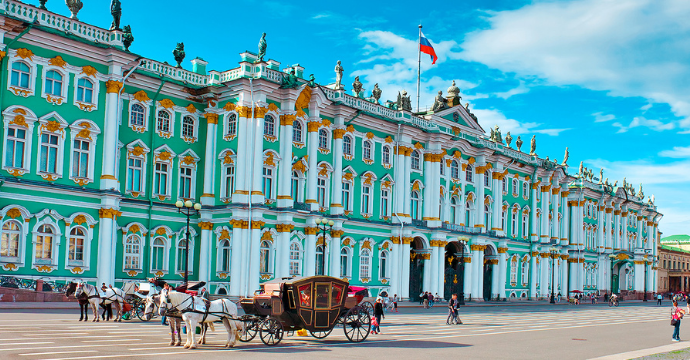 From Baroque masterpieces to frilly Rococo palaces, St. Petersburg is an architectural paradise. A kaleidoscope of colorful facades, highlights here include the magnificent Winter Palace and the Church of the Savior on Spilled Blood, a celebration of medieval Russian style.  Additionally, an array of Baroque-style institutions and a handful of Soviet-era structures make St. Petersburg an eternally interesting architectural treasure. 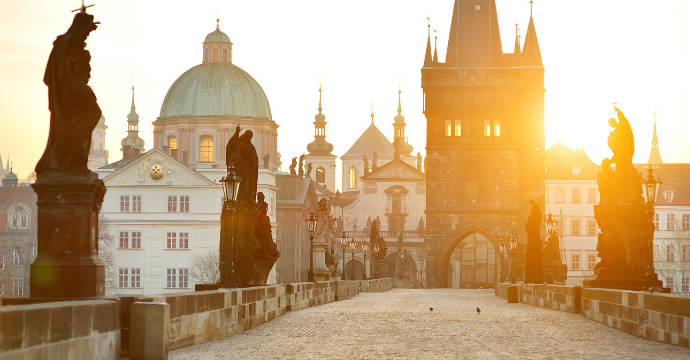 The architecture of Prague is simply spellbinding. A fairytale city, bursting with towering spires, medieval bridges and gothic-era churches, Prague is one of the best-preserved old medieval towns in Europe. Nicknamed the ‘City of a Hundred Spires’, eye-catching examples of both Baroque and Renaissance architecture can also be viewed here. Of course, the highlights of a trip to Prague include its dramatic Gothic-era Powder Tower, the Rococo-style Kinský Palace and the historic Charles Bridge. One of the most beautiful gothic cities in Europe. 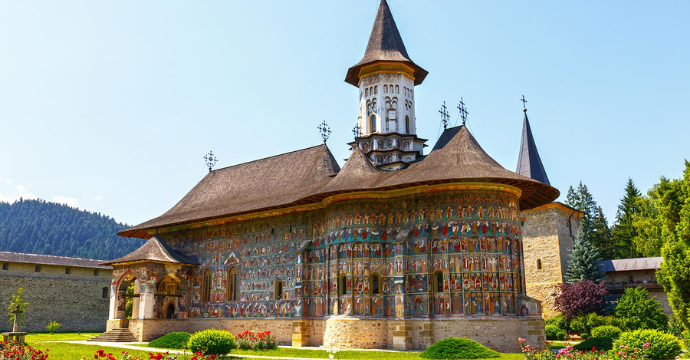 This historic region of Romania is world-famous for its amazing medieval painted churches and monasteries. Dating from the 15th and 16th-century, the eight Painted Churches of Moldavia are protected UNESCO World Heritage Sites, found within a number of quaint medieval towns and surrounded by fortified walls. Each of the painted churches has a dominant color. For example, Voronet Monastery, founded in 1487, is the most famous of the eight and known for its bright blue facade. Like all of the painted churches, the walls of Voronet Monastery are adorned with ornate frescoes depicting several religious themes. 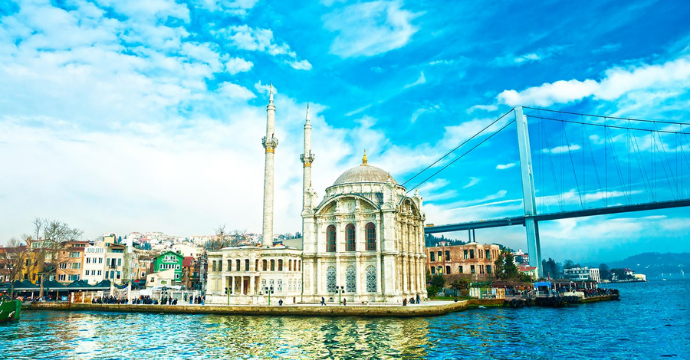 Istanbul is home to an array of architectural influences. Notably, Byzantine, Ottoman and Genoese style buildings feature heavily. The Hagia Sophia stands out as an epic example of medieval Byzantine architecture, the largest ever cathedral at the time of its construction. On the other hand, the Blue Mosque represents Ottoman architecture at its most glorious. Furthermore, newer additions such as the Dolmabahçe Palace and the Ortakoy Mosque add a flair of neo-classical and Baroque style to the Istanbul skyline. 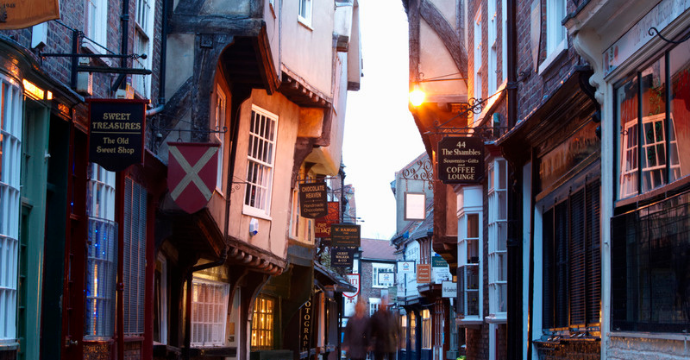 If you want to explore one of the best well-preserved medieval towns, look no further than York, in the heart of northern England. This charming city is home to  York Minster Cathedral, known for its stained glass windows and intricate interior decoration. Furthermore, its well-preserved medieval town is simply magical. The Tudor-era heart of the city, known as The Shambles, is simply unmissable, with its timber-framed houses and old-world shops.

Whether you’re an architecture lover or not, you can’t ignore the appeal of these medieval towns and gothic cities. Travel with Exoticca to explore these architectural treasures!