Ever wondered what’s inside the Pyramids of Giza? These mysterious monuments are the top attraction in Egypt and have been a source of intrigue and historic study for centuries. A true wonder of the world, the Pyramids of Giza are situated on the Giza Plateau, nearby the Egyptian capital of Cairo. But, how much do we really know about the Pyramids of Giza and can we sort the facts from fiction? Who built these giant pyramids and why? How were they constructed, and by who? Let’s dig deeper and find out the true origins and meaning behind one of the most famous monuments in the world!

A Wonder of the Ancient World 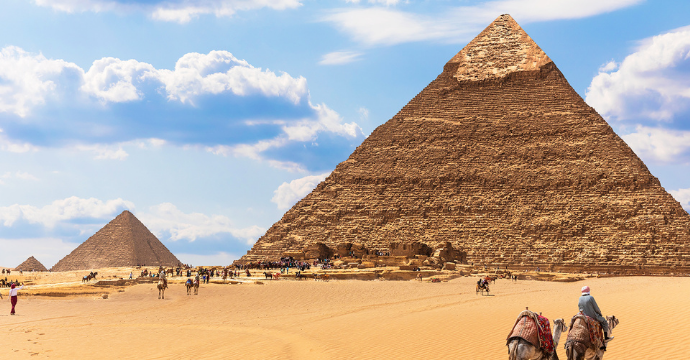 How did the Egyptians build the pyramids?

What does it take to build a pyramid of such enormous proportions? Well, over two million stone blocks, approximately 27 years and an estimated workforce of 100,000 men! There’s much debate over the history of the construction of the pyramids. Some claim that such a demanding structure required a huge workforce of slaves. Others argue that paid professionals built the pyramids. The truth is not clear, but what we do know is that each brick weighed in at anywhere between 2.5 and 15 tonnes, making for some pretty back-breaking work! Starting from the ground up, a sloping embankment was used to haul the bricks up to the construction site. As the pyramid grew in height, so did the embankment. Furthermore, many ingenious design elements, such as earthquake-proof foundations, suggest a high level of construction expertise and understanding.

What is the Great Sphinx of Giza? 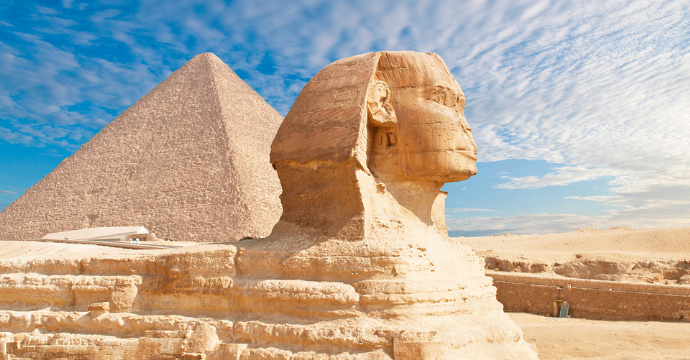 With the body of a lion and the head of a human, the Sphinx was a sacred mythological symbol. It’s thought that courage and strength were represented by the lion’s body. On the other hand, the human head symbolised the knowledge and intelligence of a king. At Giza, the Great Sphinx was constructed as a protector of the pyramids. Sculptures and carvings across ancient Egypt included similar iconography. The Great Sphinx at Giza is a source of much historical debate. It is not clear whether the Great Sphinx was built during the construction of the Great Pyramid of Khufu, or afterwards, by Khufu’s son Khafre. Nevertheless, the Sphinx at Giza is almost as famous as the pyramids themselves, and is certainly a must-see if you travel to Egypt!

Whilst it’s easy to imagine these sand-coloured in ancient times, you might be surprised to know that they once had a very different appearance. In fact, each pyramid was once finished with a high-shine layer of polished limestone! Glistening like priceless jewels, the pyramids were designed to reflect the sunlight. Sadly, this shiny covering has long since eroded away or fallen off.

Why were the Great Pyramids built? 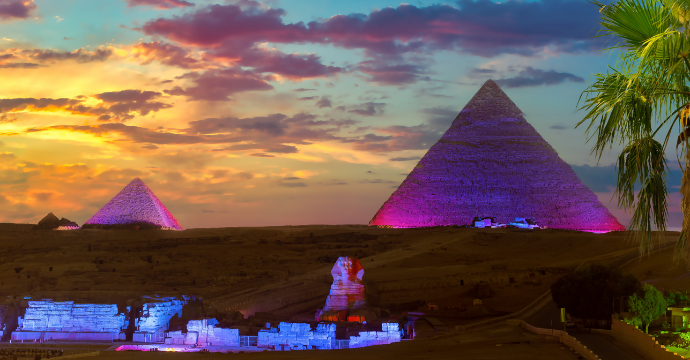 Simply put, religion was the main driver behind the construction of the Great Pyramids. The Ancient Egyptians had a profoundly complex and fascinating belief system. One of the central pillars of Ancient Egyptian religion was the existence of an afterlife. A second self, known as the ka, lived within every human. After death, your ka would go on to live an eternal life. But, this required a little prior planning. To improve their chances of being kings in the afterlife, the pharaohs of Ancient Egypt constructed the pyramids as a kind of luxury tomb. Inside, they’d store everything they could possibly need in the next world to ensure a successful transition to their afterlife. Of course, they were also status symbols. Tombs of this size were only possible for the most powerful and wealthy pharaohs.

What’s inside the Pyramids of Giza?

Perhaps the most important secret of all is what lies inside the Pyramids of Giza. As places of burial, the Great Pyramids all contain the tombs of great pharaohs. But, much of the structure is solid stone, with passageways and chambers found only at the very bottom of the pyramids. The exception to this rule is Khufu’s Great Pyramid. The tomb of this pharaoh is located in the centre of the structure, accessible by a narrow staircase. Surprisingly, there are no hieroglyphic texts, treasures, or mummies in any of the pyramids of Giza. In fact, the tradition of decorating tombs came much later in the Ancient Egyptian civilization. Instead, the interiors of the pyramids are rather austere.

Curiously, the Great Pyramid of Khufu contains a large granite sarcophagus. Carved from a single piece of granite, the sarcophagus would have been too large to place inside the pyramid after its construction. Therefore, it’s believed the pyramid was constructed around the sarcophagus. If you visit the Pyramids of Giza today, you can explore the interior of all three pyramids. Guided tours allow you to see the complex passageways and burial chambers for yourself!

Always dreamt of visiting the Pyramids of Giza? Tick this wonder of the world off your bucket list with our incredible Egypt tours. Discover our latest trips to Egypt on our official website: