Searching for the best Mayan ruins to visit in Mexico? Indeed, a getaway to Mexico isn’t just about sun, sea and mariachi bands! Home to immense history, colourful culture and vibrant cities, Mexico is up there with the best travel destinations on earth! Of course, no Mexican getaway would be complete without exploring the country’s emblematic Mayan ruins. But first, let’s get to know the great civilization that left these timeless monuments behind…

Who were the Maya?

Around 1500 BCE, the Mayas settled in Mesoamerica and built communities based on agriculture. In fact, the Maya world stretched across much of modern-day Mexico and Central America. Later, around the 3rd century CE, they began to build large ceremonial sites and impressive stone cities, using complex irrigation and terracing technology. A system of hieroglyphic writing was also established, as well as sophisticated astrological calendars and systems for understanding the celestial bodies. Indeed, the sacred books left behind by the Maya, known as ‘codex‘ are a source of much contemporary knowledge of this ancient civilization.

The Classical Period of the Maya civilization was between 250 and 900 CE. At this time, the civilization consisted of more than 40 great cities, home to populations of up to 50,000 people across Mexico and Guatemala. Of course, the decline of the Maya led to many of these cities being abandoned and overgrown with vegetation. Unfortunately, there is no clear consensus as to why this mighty Mesoamerica civilization declined, but some suggest either armed conflict, the exhaustion of agricultural land or disruption to trade routes. Nevertheless, the Maya of yesteryear left many impressive ruins behind, and these are the best Mayan ruins to visit in Mexico: 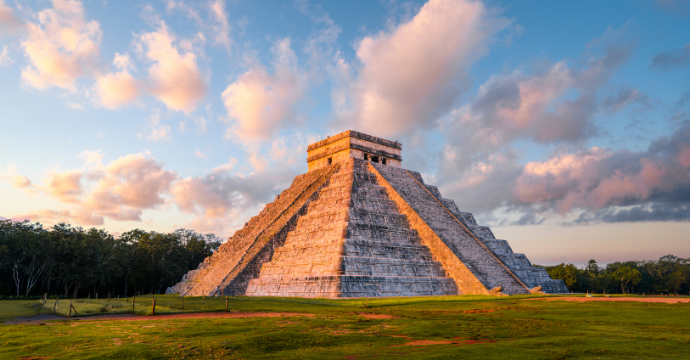 Of all the great Mayan cities, the best known is Chichen Itza. One of the 7 wonders of the world, the city was once a religious, military, political and commercial center, home to an estimated population of 35,000 people. More than 1000 years of history are encompassed within the site, which is divided into Old Chichen and Chichen Itza. In total, there are 26 Mayan-era structures to discover if you travel to Chichen Itza.

At the heart of the site lies the Temple of Kukulcan, the most famous structure at Chichen Itza.  A 4-sided stepped pyramid, if you visit during the Spring or Autumn equinoxes you’ll experience the so-called ‘Serpent Effect’ when the northwest corner of the Kukulcan pyramid casts a snake-like shadow on the central staircase! Furthermore, the site is within easy reach of the popular resorts of Cancun and the Riviera Maya, making it the most popular Mayan city to visit in Mexico. 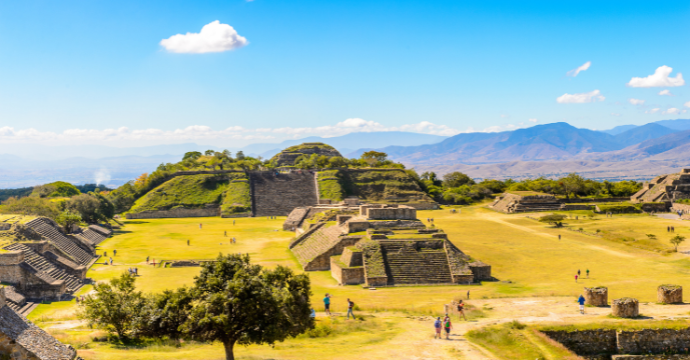 Founded around 500 BCE, Monte Alban was one of the first great Mesoamerican cities. Located in the southern state of Oaxaca, Monte Alban actually predates the Mayan civilization. Many cultures inhabited and left their mark on this incredible site, notably the Zapotecs, who interacted with other Mesoamerican communities including the early Maya. If you visit this incredible site today, you’re sure to find its size, complex structures and stone carvings simply remarkable. Although not strictly a Mayan ruin, Monte Alban is a window into the civilizations that inspired later Mesoamerican cities and communities. 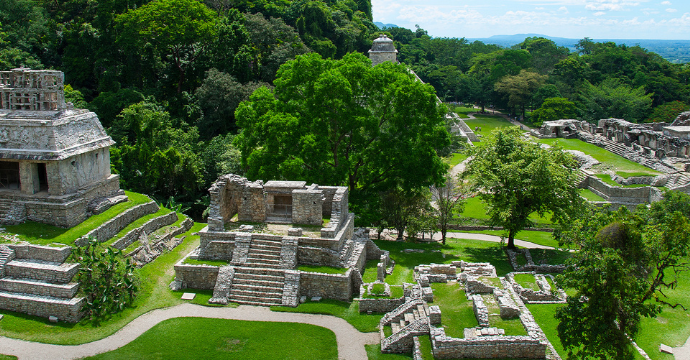 Surrounded by pristine forest, Palenque was a Maya city-state. Founded around 226 BCE, it’s smaller than Chichen Itza. Nevertheless, its significance to our understanding of Maya civilization is no less important. In fact, the stone carvings and architecture are among the finest in the Mayan world. Nestled in the Tumbalá Mountains, Palenque overlooks the rainforest. Located in the state of Chiapas, Palenque is considered one of the top Mayan ruins in the country. 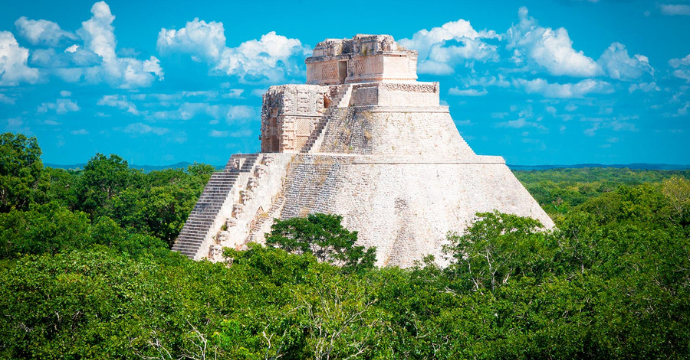 Located 70 kilometers south of Merida in Mexico’s Yucatan state, Uxmal is one of the best Mayan ruins in Mexico. Founded around 700 CE, around 25,000 inhabitants would have lived in Uxmal at its peak. The site is home to towering pyramid-shaped temples, long, low-rise palaces and an array of intricate and endlessly fascinating frieze carvings. Indeed, the central Pyramid Of the Magician is one of the most impressive Mayan structures in existence. Furthermore, Uxmal is unique due to its layout. Unlike other Mayan-era sites, Uxmal is not geometrical. Instead, it’s thought that the buildings of Uxmal are aligned with celestial phenomena, such as the rising and setting of the sun. Abandoned in the 10th-century, Uxmal is surely one of the best-preserved Mayan ruins in Mexico. 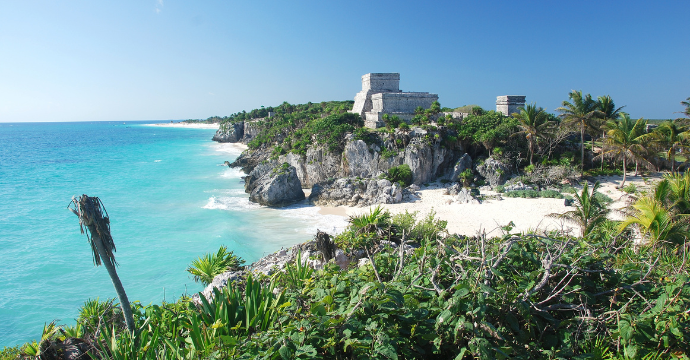 One of the most unique Mayan ruins, Tulum overlooks the Caribbean Sea. Conveniently located on the Riviera Maya, the Tulum Mayan ruins are among the most popular in Mexico. One of the last Mayan cities ever built, it’s an important relic of the later years of this great civilization. Whilst smaller than Chichen Itza, Tulum is unique due to its location. One of the only Maya cities built on the coast, it was an important center of maritime trade. Surrounded by fortified walls, the city would have been impenetrable to approaching enemies. Highlights of the site include the clifftop Castillo watchtower and the painted murals of the Templo de las Pinturas. 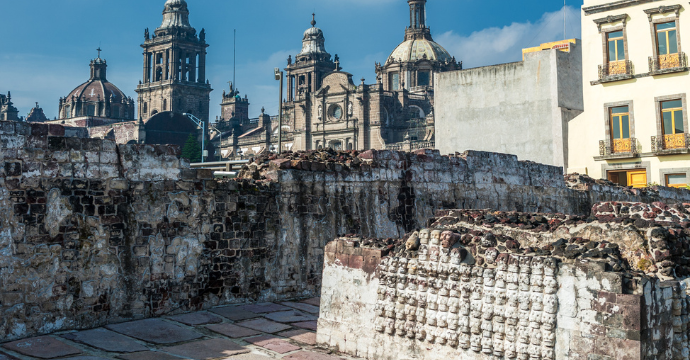 Once considered the center of the Mayan universe, Temple Mayor is located in the heart of Mexico City. Constructed around 1325 in the Mayan capital of Tenochtitlan, Temple Mayor was later destroyed by the Spanish, who built a cathedral on the site. Today, the Temple Mayor museum is home to a great array of fascinating objects related to the Temple Mayor. The museum’s collection provides valuable insight into the importance of this Mayan ruin.

Of course, a trip to Mexico would be incomplete without visiting its Mayan ruins. Discover our selection of Mexico trips with included Mayan ruin tours on our official website: