India fascinates and captivates all that visit and those who dream of one day visiting, too. It’s another world and the land of a thousand colours. India is home to many majestic palaces, that ignite nostalgia for times gone by. Of course, the Taj Mahal springs to mind first, but instead let us discover some more hidden gems of Indian majesty. The dreamlike architecture of these palaces is sure to capture the imagination and inspire you to uncover the secrets held within their walls.

Discover the most beautiful palaces and temples in India

In Mysore, a city located in the south of India, the atmosphere is very much that of the days of the maharajas, due to the splendour of the many palatial buildings and impressive architecture. The streets here, scented with a mixture of jasmine, spices and incense, invite you to get lost until you stumble upon the Royal Palace. It is the work of the English architect Henry Irwin, who designed it in a combination of Hindu, Gothic and Rajput architectural styles.

The structure is three floors of pure grey granite, with vibrant red domes crowning the four towers on each corner. Inside the palace, busy walls teeming with decorative patterns, colours and opulent arches greet you and whisk you away to a bygone age. The palace also houses numerous galleries, with sculptures, paintings, jewellery and old clothing.

If you want to see the palace in its full splendour, do not miss Sunday evenings, where after seven o’clock, thousands of light bulbs illuminate the façade.

Palace of the Winds

Among all the monuments of Jaipur, there is one with a special magnetism capable of attracting all eyes. In the city, famous for its gemstone business, the Palace of the Winds, a name that already inspires legends enclosed within its walls, stands majestically. The construction, which seems to be made of woven lace, is the work of the Maharaja Sawai Pratap Singh. It was built in 1799 and originally served as a women’s chamber, for women destined to become part of the Maharaja’s harem.

There is little behind the façade, except for old corridors and rubble, but this only adds to the intrigue of the palace. Built in red and pink sandstone and inlaid with calcium oxide, the palace owes its name to the sweet sound that the wind produces when it passes through the windows and slits. The desert air sweeps through the glass-less viewing holes and would have kept the palace exquisitely cool.

At the heart of the city of Amritsar is the mystic temple of Harmandir Sahib, a marvel covered with gold that seems to float on the sacred waters. The temple immediately charms those who visit it and in addition to its imposing colour, which is reflected elegantly in the water surrounding it, it is all enveloped in a spirituality created by the solidarity of those who inhabit it.

It is an iconic place of Sikhism, a religion practised by 25 million people. The sacred waters of the pond are also used as a purification bath and the temple is a place where visitors can have lodging and food regardless of social status, gender, religion or race. A pure shelter of peace that you are sure to fall in love with.

Built with red sandstone and nestled in the heart of a large garden, the tomb of Humayun, in Delhi, transports you to a world of Mughal architecture. A monument that depicts the adventures carried out by the Emperor throughout the Islamic world, especially in Persia and Central Asia.

The building, which was declared a World Heritage Site by UNESCO in 1993, mimics the style of one of the most famous and beautiful palaces in India, the Taj Mahal, fusing both Islamic and Persian architecture.

Its interior consists of an octagonal central room and is decorated with paintings. All facades are symmetrical, as is the whole building. Balance is also maintained in the decoration, where materials of three different colours, white, red and brown, are arranged in equal parts. The building is crowned with a large dome of white marble and it graciously unifies the whole structure.

Just 11 kilometres away from Jaipur, the capital of Rajasthan, lies the Amber Fort, which rises on a hilltop, dominating the entire area. Built in 1592 by Man Singh on the ruins of a temple dedicated to the sun, the materials used to build this oriental-style fortified palace were sandstone and marble.

The entrance, which can be traversed on the back of an elephant, if you so wished, passes through the incredible Suraj Pol Gate, with several ornate windows decorated with stone lattice work, bas-reliefs and floral motifs.

The interior of the palace is also very beautiful, with walls embedded with many small mirrors, casting light around the rooms in a delightful way. Discovering the fort will make you feel like you have just stepped into a tale from One Thousand and One Nights!

Take a look at our multi-centre holidays in India and enjoy the most of this amazing country. 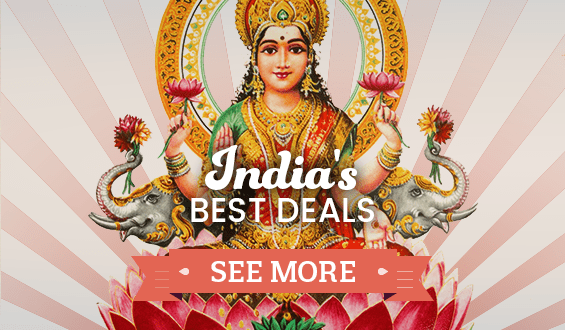