There are approximately 40,000 temples in Thailand, dotted around the country from Bangkok to Sukhothai, Ayutthaya and beautiful Chiang Rai. If you travel to Thailand you’ll likely want to visit a number of these famous temples. The majority are Buddhist temples, although a handful of Hindu temples can also be found. Nevertheless, if you’re planning a trip to Thailand, these are the most unmissable Thai temples to include on your itinerary! 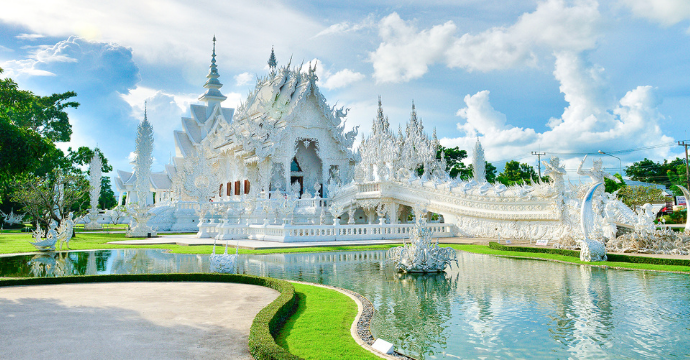 Official known as Wat Rong Khun, the White Temple is one of the most unmissable temples in Thailand. A relatively modern construction, this temple was opened in 1997. White Temple was created by Thai artist Ajarn Chalermchai Kositpipat and is located in the province of Chiang Rai. Intricately adorned with gleaming white sculptures and decorations, the White Temple looks like something from another world. Furthermore, the sculptures and decorations depict Buddhist beliefs and mythology. For example, the Gate of Heaven, the Cycle of Rebirth Bridge and the intricate Naga Serpents contain a multitude of hidden meanings to uncover. With a three-tiered roof and surrounded by a mirror-like lake, visiting the White Temple in Thailand is a must-do. 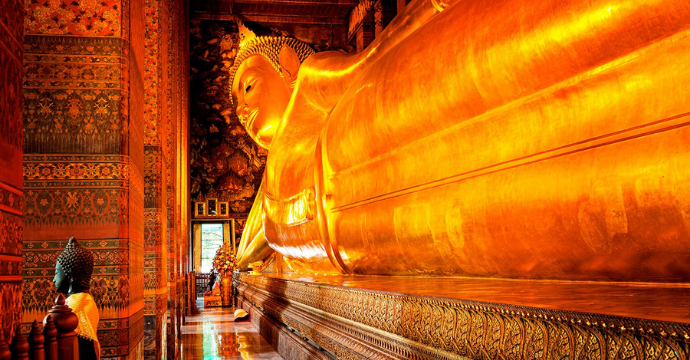 Also known as the Temple of the Reclining Buddha, Wat Pho is one of the most popular temples in Thailand. Home to the ashes of King Rama I, Wat Pho is famous for housing the largest collection of Buddha images in the country. The most famous depiction of Buddha is the 46 metre-long Reclining Buddha, a huge golden icon that represents the end of reincarnation and the entrance to Nirvana in Buddhism. The Wat Pho complex is also home to 108 bronze bowls, representing the 108 positive actions that led Buddha to enlightenment. Overall, Wat Pho is one of the best Thai temples to visit for an introduction to Buddhism in Thailand. 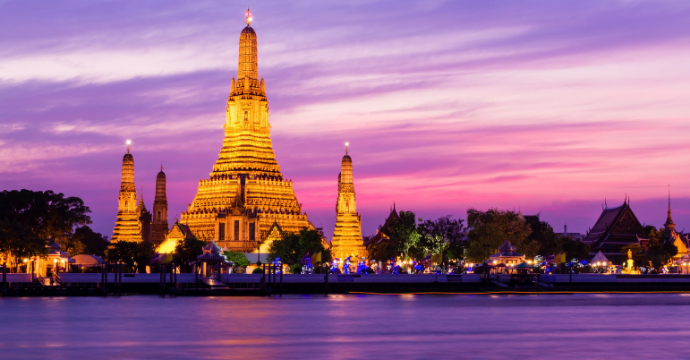 Standing tall above the west bank of the Chao Phraya River, Wat Arun is a symbol of Bangkok. Nicknamed the ‘Temple of Dawn’, as the sun rises over Bangkok the central stupa, measuring 82 metres in height, takes on a radiant pearly iridescence. The central stupa or ‘prang’ is said to represent Mount Meru, the centre of the earth in Tibetan Buddhism, whilst all five stupas are decorated in glazed porcelain and seashells. Additionally, the interior is home to amazing murals, in honour of Thai royalty. 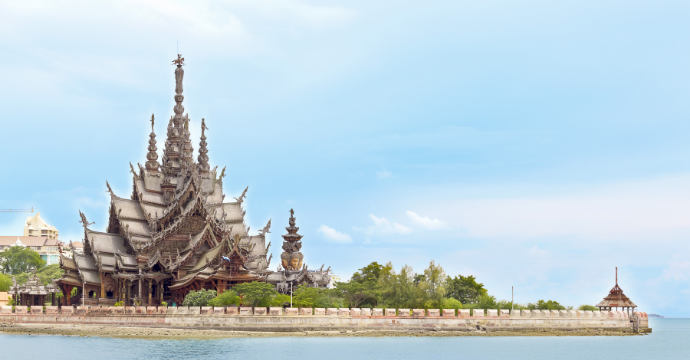 Carved entirely from teak wood, the beautiful Sanctuary of Truth is located in Pattaya, on the Gulf of Thailand. The Sanctuary of Truth was built to function as a museum of philosophy, art and religion. You could spend hours admiring the intricate carvings, depicting scenes from both Thai, Hindu, Buddhist, Chinese, and Khmer traditions. Although construction began on the sanctuary in 1981, it remains unfinished, but visitors still flock to this site to the amazing fusion of architectural styles and religious beliefs.

5. Temple of a Million Bottles – Sisaket

One of the most unique temples in Thailand, the Temple of a Million Bottles is officially known as Wat Pa Maha Chedi Kaew. As a result of an eco-friendly initiative to reduce the mounting litter problem, used glass bottles were donated to the local monks of Sisaket who used the waste to build a temple entirely of glass bottles over the course of two years. Amazingly, all of the 20 buildings in the complex is made of glass bottles, numbering 1.5 million bottles in total. Furthermore, the positive message of recycling and protecting the planet eloquently demonstrates the Buddhist principle of non-harm. 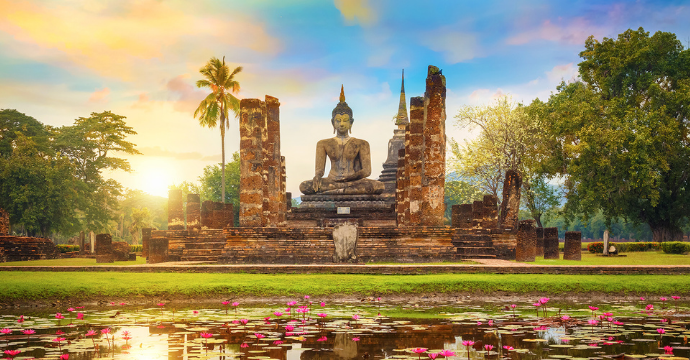 Known as the Temple of the Great Relic, Wat Mahathat is located in Sukhothai Historical Park. Dating back to around the 14th-century, this Thai temple was one of the most important of the ancient Ayutthaya Kingdom. Although partially ruined, this incredible monastery complex is home to the famous ‘Tree Buddha’, a stone Buddha sculpture that has been encompassed in ancient tree roots over the centuries. 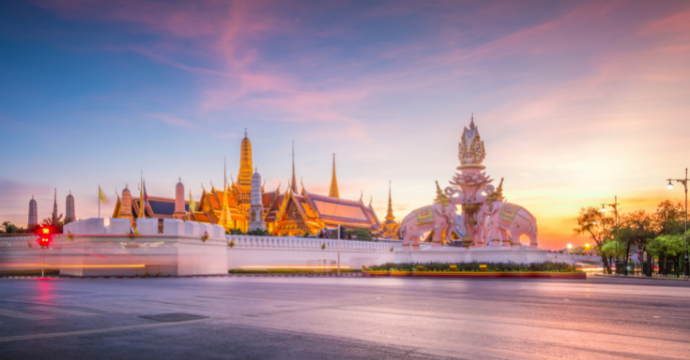 Located in Bangkok, the Emerald Temple is home to the treasured icon of the meditating Gautama Buddha. Although made from jasper, rather than emerald, this figurine is thought to bring good luck to all who view it. In fact, over the centuries the Emerald Buddha has travelled throughout Asia before coming to its final resting place at the Emerald Temple. Curiously, the Buddha has its costume changed every season. Since it arrived in Bangkok in 1784, the figurine has been cared for by a succession of Thai kings 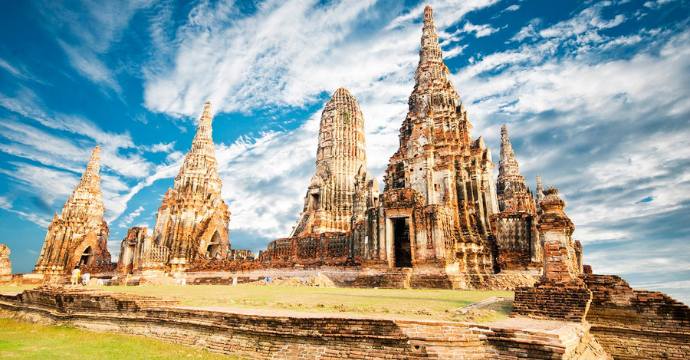 Commissioned in 1630, this Khmer-style temple is found within the ancient city of Ayutthaya, once the capital of the Siamese Kingdom. One of the best temples in Thailand, the impressive ruins of Wat Chaiwatthanaram reveal the immense influence of Buddhism on Thai culture. A UNESCO World Heritage Site, this was originally a Royal Temple, where Thai royals would perform religious ceremonies. If you visit Wat Chaiwatthanaram, you will see that the structure of the temple reflects the Buddhist view of the world. The architectural style is similar to the Khmer temples of Cambodia.

So, now you know the most unmissable temples in Thailand, which will you visit first? Explore our trips to Thailand to find out more.