Our recommendation to visit Scotland 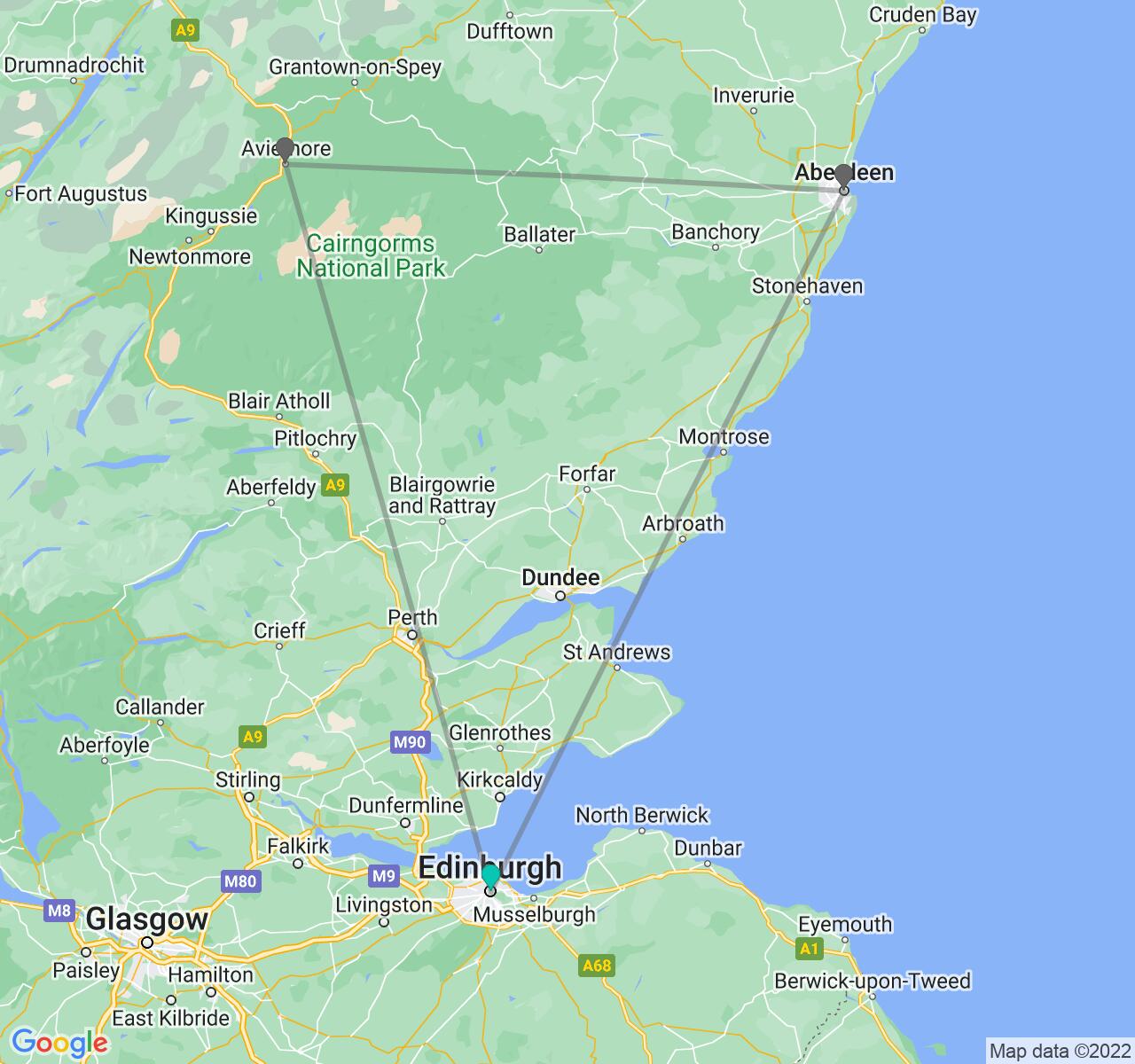 Our recommendation to visit Scotland and neighboring countries 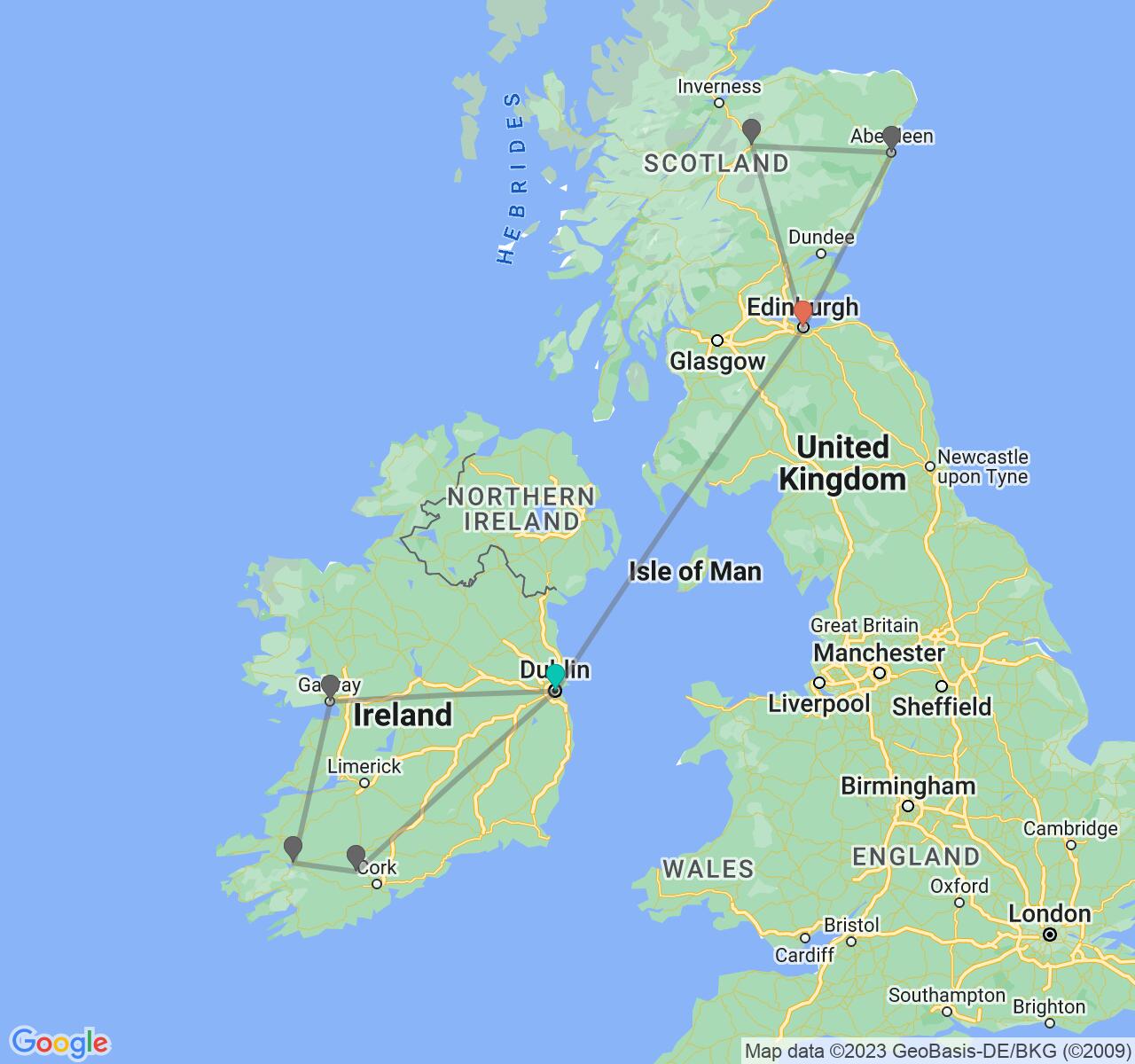 Stunning Ireland & The Highlands in 16 days

The Royal Capital and The Highlands in 12 days

A magical country, known for its breathtaking Highlands and historic cities, Scotland is one of the nations of the United Kingdom, covering the northern reaches of the kingdom and including 790 islands, dotted across the North Sea, Atlantic Ocean and the Irish Sea. The capital, Edinburgh, is famed for its annual Edinburgh Festival, whilst other notable cities include Glasgow, Aberdeen, Inverness and Dundee.

This small country has a fascinating heritage, displayed in its castles, monuments and unique culture and traditions. A trip to Scotland evokes images of wild, rugged Highlands, mist-covered lochs, tartan-clad bagpipe players and, not forgetting, delicious Scottish whisky.

From the fantastic museums and galleries of Edinburgh to the remote ruins of Urquhart Castle, perched on the shore of legendary Loch Ness, Scotland is filled with cultural treasures and is a great choice for an organized package tour vacation. Scotland is known for its unpredictable weather, with cold winters and mild summers. The best time to visit Scotland is during the spring or autumn when the Highlands are at their most colorful and the crowds have dissipated.

Some of the more popular travel destinations in Scotland are the rugged peaks of the Isle of Skye, the vibrant city of Edinburgh, the picturesque surroundings of Loch Lomond, historic Glen Coe and the wildlife haven of the Shetland Islands. Nature lovers can trust Scotland to provide some of the most pristine wildernesses left in Western Europe today. The Northern Highlands, Cairngorms and the Outer Hebrides are home to the most unforgettable landscapes, but history-buffs might prefer visiting the historic castles of Perthshire and Aberdeenshire on a vacation to Scotland.

The rich history of Scotland is what makes the country such a popular travel destination, immortalised in films such as Braveheart and the legendary poetry of national hero, Robert Burns. From its ruined castles to the mysterious standing stones of Orkney and Shetland, incredible monuments over 10,000 years old, there are countless historic sights to explore if you travel to Scotland.

In the 5th-century Celts arrived in Scotland from Ireland and became known as Scots. The inhabitants at the time, known as Picts, had strong community ties and tribal culture, although the Picts and Celts unified in the 9th-century and the territory soon became known as Scotland. The Romans famously build Hadrian’s Wall to keep the Picts, known for their brightly colored war-paint, from invading Britannia in the early Middle Ages.

One of the best known historical figures from Scottish history was William Wallace, who led the Scots against the forces of Edward I of England at the Battle of Stirling Bridge after the English monarch claimed to right to the Scottish crown in the 13th-century. Despite early victories, eventually, Wallace met a gruesome end. As such an important emblem of Scottish Independence, there is a William Wallace Monument in Stirling that you can visit on a tour of Scotland and closeby is the very bridge where the famous conflict took place. Another icon of this era was Robert the Bruce, who successfully secured Scotland’s independence at Bannockburn in 1314.

In 1603, James VI of Scotland inherited Ireland and England, forming a union of three nations, a precursor to the United Kingdom of today. A century later, the Act of Union of 1707 created the United Kingdom, but led to further power struggles between England and Scotland, resulting in a series of Jacobite uprisings. Today, Scotland is a devolved nation of the UK and you can find the Scottish Parliament in Edinburgh.

Throughout the Highlands and Lowlands of this historic nation, you’ll find relics of its turbulent past. Fortresses such as Caerlaverock and castles such as Stirling and Edinburgh pay testament to the rich and complex heritage that shaped modern-day Scotland.

Considered one of the most beautiful countries on earth, Scotland is jam-packed with natural wonders, from towering mountain peaks to glistening lochs and atmospheric glens. A package tour of Scotland will unveil an unforgettable mix of landscapes and it is no surprise that many choose to visit Scotland for hiking trips and walking vacations.

Of all the natural spectacles to be found on a tour of Scotland, the Three Sisters are perhaps the best known and loved. Three steep ridges, nicknamed the Three Sisters rise from the atmospheric Glen Coe Valley, an area of rich natural beauty in the Scottish Highlands. Visiting the Three Sisters is a spectacular sight at any time of year and the untouched landscape is a haven for walkers and wildlife enthusiasts.

Other unmissable natural sights to discover if you travel to Scotland include Green Loch in Glenmore Forest Park, a magical green body of water nestled in a lush forest, Galloway Forest Park, an area so remote that it is one of the world’s best destinations for stargazing and Rannoch Moor, one of Europe’s last remaining true wildernesses, home to deers, grouse and other wildlife.

Scotland is also home to the tallest mountain in the British Isles: Ben Nevis. Situated close to the town of Fort William, a great base for excursions along the West Highland Way, Ben Nevis reaches the lofty height of 1,345 meters at its peak. More than 100,000 walkers attempt to scale this mountain every year.

More than just tartan kilts and bagpipes, Scotland has a rich and diverse national culture which the Scots are rightly proud of. In recent years, Scottish history and culture have peaked interests around the world thanks to the popular television series Outlander, which is set in the days of the Highland clans. Originally small kinship groups, clans still endure today, with more than 500 active clans, each with its own unique colorful tartan pattern. A cornerstone of traditional Scottish culture, tartan kilts are worn for special occasions and if you visit Scotland you can even create your own tartan at one of the famous Woolen Mills, found throughout the country.

A celebration of Scottish culture, the Highland Games is a must-see if you travel to Scotland in the summer. This annual event celebrates traditional games, music and dress. Scots also love modern sports and Scotland is said to be the ‘home of golf', with the famous St. Andrews Golf Course considered to be the oldest golf course in the world. Football is also at the heart of modern Scottish culture. Celtic and Rangers are the Scots’ best-loved football teams.

If you take a vacation to Scotland you’re sure to fall in love with its amazing food and drink scene. Of course, the most famous culinary export is Scotch Whisky, known and revered worldwide. Speyside Whiskies, which are distilled near the River Spey in Strathspey are the most popular varieties and a trip to Scotland is incomplete without tasting this fiery ‘Scottish water’. If you prefer something non-alcoholic, Irn Bru is a close second when it comes to Scotland’s favorite drinks. This fizzy soft-drink is bright orange and is widely consumed throughout the country.

When it comes to food, Scotland is home to an innovative and thriving food scene, particularly in the major cities where you’ll find a host of both trendy and traditional restaurants. In the last few decades, Scotland has moved away from the stereotypical image of deep-fried chocolate bars and haggis, although you can still find these traditional treats in the local chip shop or on the dining table on Burns Night.

If you visit Scotland for the first time you might be surprised by the wide variety of slang words and local dialects still in use today. Scotland is famed for its unique sayings and slang and, in fact, there are two official languages: English and Scottish Gaelic.

Scotland is filled with unparalleled natural beauty, vibrant cities and a whole host of historic landmarks to explore. Travel to Scotland and discover a country steeped in tradition, full of legends and landscapes.

Receive assistance from one of our travel experts and plan the perfect trip.

Please fill out this form with the information about you and the trip your are planning to do. One of our experts will personally contact you answering all your questions and will offer you the best options according to your needs.
*Required fields

Save time, call a travel expert for free
Allow one of our expert help you to arrange your reservation
+1 888-488-0592
Unbelievable prices

Save when buying your next trip thanks to super discounted prices that we negotiate with airlines and hotels.

Each one of our itineraries are designed to ensure you have the best possible experience in every destination.

Exoticca is a member of ASTA. Our membership means we adhere to ASTA's code of ethics, commitment to quality service, and ethical business practices.