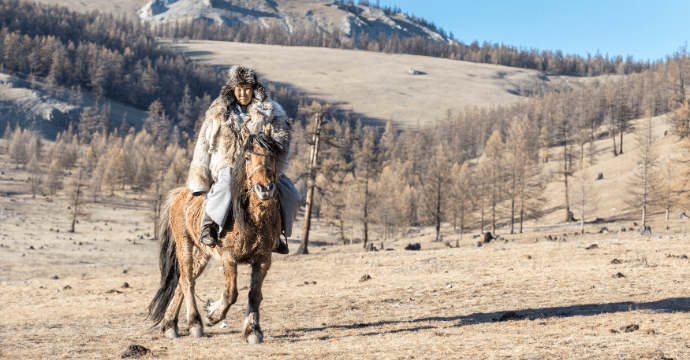 At the height of its powers, the Mongol Empire stretched over 9.27 million square miles making it the largest to ever share a common border. Genghis Khan’s ruthless nous spurred on this army intent on world domination, which Incredibly conquered more land than the Romans did in a time frame of 25 years.

The beginnings of the Empire

In the 1100s, the plains of Mongolia and modern-day Siberia consisted of separate tribes led by Khans. Because of the lack of unity, these nomadic groups would often rage war against each other. Land grabs and disputes caused a great deal of unrest up until Genghis Khan united the people of this unforgiving landscape. Born to a chieftain in 1162 to the name of Temujin, his youth was awash with tragedy. Upon the death of his father by poisoning, Temujin and his family were abandoned by his tribe. During this time his brother was suspected of hoarding food and supplies from the rest of his family. After hearing this Temujin executed him, and with it, earned the respect from his peers to seize the power of his tribe.

The extremely ambitious Khan soon took the fight to the north of China. However, it wasn’t until 1218, when the Shah of Khwarezm confiscated a Mongol delegation’s trade goods and executed the Mongol ambassadors, that he decided to expand the Mongol Empire. This gruesome insult from the ruler of the modern-day lands of Iran, Turkmenistan, and Uzbekistan, resulted in the Mongols furiously attack and conquer these lands to the south.

Terrifying hordes of Mongols warriors mainly attacked from horseback; however, they were also skilled in raiding walled cities. These techniques proved essential in their exploits across the fortified hubs of Central Asia and the Middle East. In spite of the Genghis Khan’s ruthless reputation, he did often spare cities that yielded.  Yet, If you decided to put up a fight and lost, mercy wasn’t the Khan’s usual choice; many believe he was responsible for over 40 million deaths during his lifetime.

The death of Genghis Khan

In 1227, Genghis Khan died,  but not before dividing his empire into four khanates ruled by his sons and grandsons. These were the Khanate of the Golden Horde, in Russia and Eastern Europe; the Ilkhanate in the Middle East; the Chagatai Khanate in Central Asia; and the Khanate of the Great Khan in Mongolia, China, and East Asia.

In 1229, the Kuriltai elected Genghis Khan’s third son Ogedei as his successor. The new Khan continued to expand the Mongol across the vast plains of Asia and beyond. In East Asia, the northern Chinese Jin Dynasty, which was ethnically Jurchen, fell in 1234; the southern Song Dynasty survived, however. Ogedei’s troops rode into Eastern Europe, conquering the city-states and principalities of Rus (now Russia, Ukraine, and Belarus), including the important city of Kiev. In 1240, the Mongols took Persia, Georgia, and Armenia.

A year later, Ogedei Khan died, which in turn halted the Mongols’ momentum in Europe and the Middle East. Batu Khan was preparing to attack Vienna when news of Ogedei’s death distracted the leader. Most of the Mongol nobility lined up with Guyuk Khan, the son of Ogedei, but his uncle refused. For more than four years, the great Mongol Empire trundled on without a Khan before it started to fall apart.

The fall of an empire

It was in the year of 1335 when the Mongols lost control of Persia. The Black Death spread through Central Asia along Mongol trade routes, devastating entire cities. Goryeo Korea fought off the Mongols in the 1350s. By 1369, the Golden Horde had lost Belarus and Ukraine to the west; meanwhile, the Chagatai Khanate disintegrated and local warlords filled the void. Most significantly, in 1368, the Yuan Dynasty lost their hold on China. The ethnic Han Chinese Ming Dynasty seized power to establish their rule for the following 300 years.

Genghis Khan’s descendants continued to rule in Mongolia itself until 1635, until their defeat to the Manchus. In spite of the substantial lands under their control, the world’s largest joined land empire disbanded only 140 years after its humble beginnings. To this day the Mongol Empire’s indelible marks still scar the remaining cities of the ancient Silk Road.